How to use women's cycling to win every argument online (and possibly lose friends and alienate people!)

Share All sharing options for: How to use women's cycling to win every argument online (and possibly lose friends and alienate people!)

Now I'm not for the moment suggesting that you are the kind of person who spends all day online reading about cycling, and likes to win pointless arguments with people you've never met, on forums that aren't Podium Cafe... but just in case, here's the Pigeons version of Top Trumps, just for you. 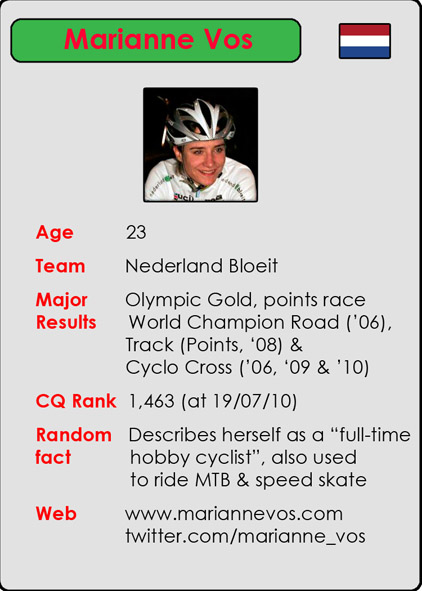 This is the last year it'll be possible to use Marianne as best young rider, so make sure you use it at every opportunity!

Marianne Vos is pretty much a force of nature when it comes to cycling - she's got a list of palmares that never seems to stop - just like her season.  Her biggest cycling problem seems to be whether to ride Track or 'Cross in the winter months (even Marianne hasn't found a way to win both Track and 'Cross World Champs in the same year.  She's a threat in the sprints, Classics, and any stage full of short, sharp, thigh-biting climbs.   Even though she's not a pure climber, she still came 10th in the Stelvio Stage of the Giro Donne (*the* biggest and hardest women's stage race of the year) - the lowest she placed in any of the stages, which was crazy in itself.

On top of that, she seems like a really nice person, friendly and willing to answer fans' questions on her twitter - and she always comes across as genuinely enjoying what she does.  Makes you sick, doesn't it?

Now you might think that she is a shoe-in for pretty much all cycling Top Trumps arguments, including Best All-Rounder, but follow me below the jump to see a rider  who'll out-trump even Marianne! 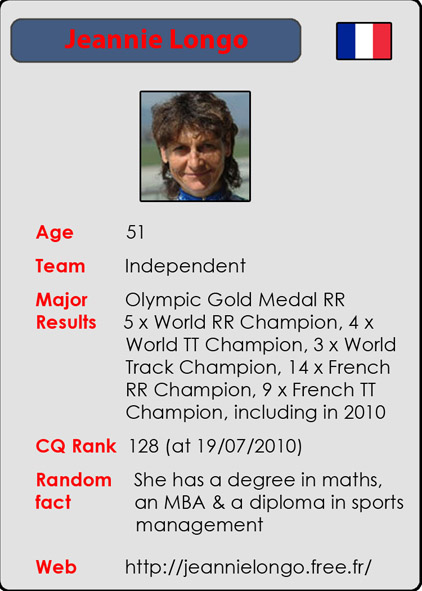 Even Marianne has a long way to go before her palmares reach those of Jeannie Longo-Ciprelli.  Occasionally you might see something that suggests Jeannie Longo is single-handedly responsible for women's cycling in France not reaching the same levels as men's, but that's slightly bizarre.  I think the idea is that Jeannie is still so strong that every one else looses the will to live when they have to compete against her, but really, she should be an inspiration.  She still winning National Championships at 51, and I wouldn't put it past her to clock up another few national TT jerseys before she retires... 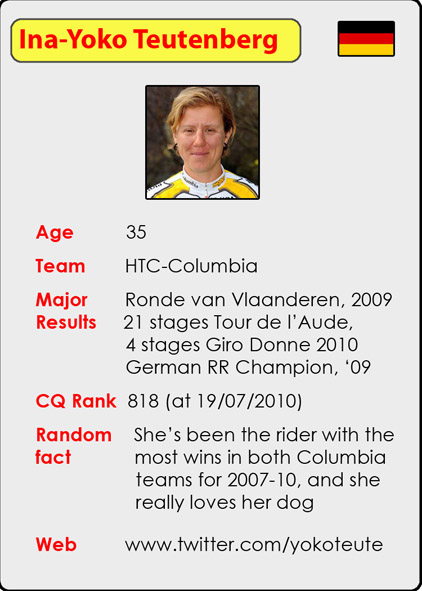 Who's the best sprinter in HTC/anywhere?

Who needs arguments about whether Cav or Greipel should be number 1, when there's Ina-Yoko Teutenberg in the picture?  She recently won 4 stages in a row at the Giro Donne, including the Time Trial, which was a surpise even to her.  And it's not as though the competition isn't up to much either - she's beating the best in the world and making it look easy.  Plus she tweets about how painful the mountains are! 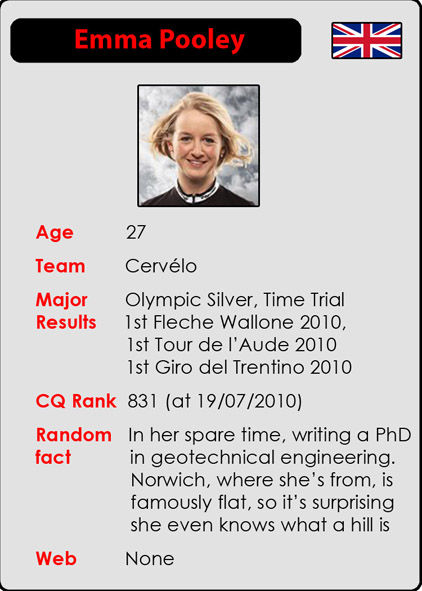 Emma Pooley's having an absolutely stellar year so far.  Within a week she won the Fleche Wallone, the GP de Suisse Time Trial and the GP Elsy Jacobs, and then went on to win the Tour de l'Aude and the Giro del Trentino, as well as breaking Nicole Cooke's 9-year unbeaten run in the British National Championships.  She "only" came 5th and won the Mountains jersey in the Giro Donne, but the season's not over yet...  You can spot her in the peloton as she's only 5 foot 2 (157cm) tall, looks shorter, and is the one zooming off up the mountains.  She's fluent in about 4 languages, and has even been interviewed by Gavia!

I've put in Best British rider, but you can play the same game with Marianne for Best Dutch Rider, Ina for Best German Rider (with an argument for Judith Arndt or Claudia Häusler), Mara Abbott for American etc etc.

So hopefully that gives you an idea of just some of the ways you too can use women's cycling to be a smartarse.  I'm sure there are more - and if you're finding arguments where you need more help, tell me in the comments, and I'll find a personalised Top Trumps just for you!