Summer on the womens’ racing calendar means stage racing, and lots of it. This week a large part of the pro peloton heads out to Germany for the 23rd edition of the Internationale Thüringen-Rundfahrt der Frauen, a six day, 620km exploration of the hills and towns in the German province of Thuringia. The word Rundfahrt is a particularly appropriate description because not only does the race tour around Thuringia, but each stage is by itself a circuit race starting and finishing in the same town. And with a beautiful symmetry that surely must be down to German organisational skills, not only do the stages run from A to Z, but they do so in alphabetical order.

Stage 1 (87.6km 700m ascent) starts and finishes in the town of Altenburger. It is quite comfortably the shortest stage of the week, although they make up for that by including possibly the most vicious climb, the wall of Meerane, only 400m long but hitting a maximum gradient of 23%. In the section on this stage on the race website, much is made of Altenburg’s connection with the history of playing cards, although I reckon the connnection with Frederick Barbarossa has far more juicy details. 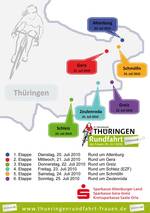 Stage 3 (128.7km, 1800m ascent) is based around the town of Greiz, famous for its two castles: the lower castle and the upper castle. That should give you some hints of what the local terrain is like. We’re not talking mountains here, the highest point around is just under 500m above sea level, but there are lots of opportunities for a race organiser to gain and lose those 500m. Repeatedly.

Stage 4 (23.3km, 240m ascent) is a rolling individual timetrial around the town of Schleiz. Well rolling’s actually a pretty good description of the whole week. No massive climbs, just the equivalent thereof neatly cut into small sections and hidden away where you might not at first notice.

Stage 5 (115.8km, 1000m ascent) is a circuit race around Schmölln, the town where vowels go to die. A lap of 19.3km is ridden six times to make up the race distance, and in one of those delightful whimsies of geography, categorised climbs appear on odd laps, intermediate sprints on even ones.

Stage 6 (134.5km, 1600m ascent) is a figure of eight based around Zeulenroda-Triebes, which right now has a photograph from last year’s race on the front of its website, and talks about making Zeulenroda "die Stadt Zeulenroda-Triebes auf den 1. Platz zu radeln," "The number one place to cycle"

There is a startlist up, although like most startlists it’s fairly approximate. I know for sure that both Ina-Yoko Teutenberg and Giorgia Bronzini won’t be present. To win here what you most of all need is a strong team, as it is all too easy for a small break to slip away on the hilly roads one day and get a big enough gap to keep the leader’s jersey until the end of the race. Last year Linda Villumsen did just that on stage 3 and had her Columbia-HTC teammates there to help her defend that lead from determined attacks from Trixi Worrack and Marianne Vos. She’s back to defend her title, and no doubt Trixi Worrack will be looking to put on a good show again to help Team Noris in their ongoing search for a new sponsor. Vos doesn’t seem to be on the start list, but others to keep an eye on include Charlotte Becker, now with Cervelo, and Emma Johansson of Red Sun.

The race website is probably one of the best around with detailed stage maps, profiles, histories, and photos and videos from past years. Most of it translates quite nicely through Google too(although no doubt some regret that). Media coverage of this race was great last year and I expect it to be the same again. Those organiser videos may take a day or two to arrive on You Tube, but the local TV station MDR Thüringen included regular extended reports on its evening news bulletin at 19:00 CET daily, simultaneously broadcast live on the web and available on demand on the website for a further seven days. The live ticker is also one of the best around, and timing so probably complete results will be handled by romers.nl.

Bump - Watch the 19:00 local news complete with a report from the race right now here.