What is it? Short, flat, fast, and painful.
Got Climbs? Not so much.
Yellow Jersey Battle: No one wants to start the Tour with a bad day, but the overall won't be won or lost today.
Ideal Rider: Fabian Cancellara. Big legs, big watts, big fun.
@Gavia: This stage marks the first traditional prologue for the Tour since 2007. Who won in 2007? Why Fabian Cancellara, of course.

The Rotterdam prologue runs over 8.9 kilometers. There are two small bumps in the profile. Those aren't hills, they're bridges. The prologue reaches its highest point at 20 meters above sea level. This race is for the specialists then, for the riders who can power the flats and who don’t much bother with going uphill. The course traces out a kite shape and crosses the Neiuwe Maase by way of the scenic Erasmusbrug. After running along the canal, the riders ride over the Willemsbrug to Noordereiland before again crossing the canal to reach the finish. The bridges provide the only elevation gain on the course.

One possible obstacle? Wind. It can be windy in Rotterdam, and the riders will find little shelter as they cross the canals. All the more reason to expect a specialist to win this prologue. Fabian Cancellara and Bradley Wiggins are among the obvious favorites here. 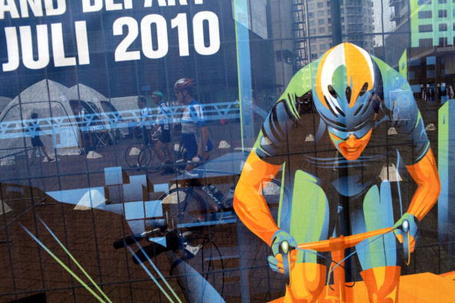 Join the livethread and discuss todays stage live here. Follow the links below.

Cancellara Wins Again!
No great shock today. Fabian "Spartacus" Cancellara stomps on everyone else to take the Yellow Jersey. Tony Martin's early start gamble paid off and he looked like a winner for a long time but unlike the German soccer team he had to surrender in the end. Lance Armstrong channeled some rage and was first of all the big GC contenders. Read more...

Know Your Tour: Do We Need a Prologue?