Stage 1 was only a warm-up (just in case anyone was feeling a bit chilly), but now the racing gets properly underway with 130km from Sacile to Riese Pio X (the X is pronounced "decimo", the town is named after a Pope), in the longest stage of this year’s race.

Sacile started out as a stronghold of sorts on a couple of islands in the middle of the river river Livenza but most of the shape of the modern town comes from it falling into Venetian hands in the 15th century and becoming a place for posh Venetians to stay in the summer. Oddly, however, it looks more like Bologna than Venice. If you want video, this is a nice drive through the centre, while for those who understand Italian this goes more in to the history. All of that will be entirely lost on most of the riders who don’t hang around there for long, but instead meander down the Livenza and around the Friulian plain for a while before crossing the river Piave at Nervesa della Battaglia. Nervesa is not only the site where the Italian army decisively defeated the Austrians in 1917, but also the site of the coolest cycle-trainer in the world.

There’s a nice summary of the local history here if you want more. By the look of the map of the hilly area they circle just north-west of Nervesa, along with lots of streets seemingly named after military regiments, I would guess that this is the Italian equivalent of Verdun, and a protected monument. Anyone who rode the 2007 Giro will recognise Crocetta del Montello where that year’s race began, and from there the race heads into the town of Riese Pio X for three laps of a circuit finishing with a sprint outside yet another building of Pasta Zara. If you’re thinking that Riese Pio X sounds familiar, that’s because that’s where Monia Baccaille defended her Italian title just last week, and by the look of the photo on this Tuttobici report I suspect that the finish won’t be a million miles from there. Maybe just this time the Italians will use their inside knowledge to get one over on Ina-Yoko Teutenberg. Or maybe not. 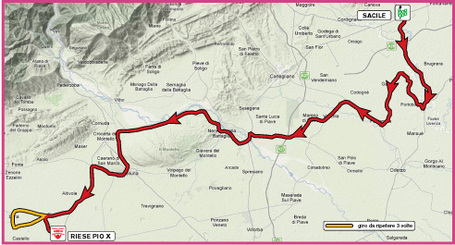 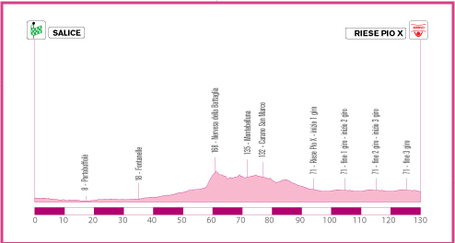 Rai Sport 1 has half an hour of highlights timetabled for 20:00 CET. Twitter will doubtless have the result long before that.