Know Your Tour! Stage 1: Why Do Bad Crashes Happen to Good People?

Share All sharing options for: Know Your Tour! Stage 1: Why Do Bad Crashes Happen to Good People?

In the early days of the Tour, one of the most-discussed and least popular matters is always crashes. They seem to come out of nowhere, in the middle of the stage or at the end of a sprint. They sometimes result in little harm; other times sporting tragedy (rarely, thankfully, human tragedy). They always look horrifying.

Crashes happen for a wide variety of reasons. Most often it's two riders touching wheels, throwing one or both of them off-balance. Other examples, which you can find on youtube if you have a strong stomach: 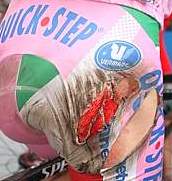 And so on. But crashes seem to be more prevalent in the first few days, and everyone has come into this year's Tour de France particularly worried about the roads in the Netherlands. This is because the Giro d'Italia just staged its own pass through Holland, starting in Amsterdam and continuing to Rotterdam, Middleberg and other stops along the Tour de France route. And the result was carnage. There are a few special culprits in the first days of the Tour... in no particular order:

Strange Roads: The Tour likes to hold its grand depart in towns not normally visited by the race, big cities like Rotterdam or Monaco last year or London three years ago. These roads are often different than what the racers are accustomed to. They change shape with lanes being added and dropped. They have lots of traffic implements, like painted lines (slippery when wet) and islands for lights. Worse still are cement curbs which direct traffic lanes in one direction or another, lovingly referred to as "road furniture" by the riders. All of these are potential hazards if you're not being careful, and it's hard for 200 people on bikes to be careful all at once.

Nerves: for a lot of riders, the Tour de France is a new and unusual experience. Sort of like joining an NFL game after years of touch football. The meaning is greater, the audience is huge, and the speed is hard to believe. So you get nervous riders, and nervous riding is the cause of a lot of crashes, from their level all the way down to your neighborhood criterium. Usually the nerves calm down after a few stages. Or so we hope.

The Battle for Safety: Ironically, the riders' desire to stay safe often leads to crashes. It's a universal truth, just like nervous riding, that you can stay out of trouble by riding at or near the front of the race. Of course, few riders want to be on the very front, where you lose the benefits of drafting, but in the top ten or so is preferable. That way, only ten people can do something stupid to cause you to crash, as opposed to riding at the back and hoping that all 200 people in front of you ride smart. The problem is that 200 people can't all be in the top ten. The problem is worsened when the race approaches a more obvious hazard known to everyone, such as the switch from a wide road to a narrow one, or changing over to a stretch of cobblestones. In the 5 kilometers prior to this change is when you get mad dashes to the front from all directions, all in pursuit of a safe place to ride. Riders might blame crashes on the conditions or a certain individual, but this universal cyclist behavior is as big a culprit as there is. And this is a big problem, not just in week 1 but all the way to Paris.