You might think there's only 1 stage race in France worth following this week, but you'd be mistaken!  While half the women's peloton are in Germany, riding Thüringen-Rundfahrt, the other half are in deep rural France, riding the other post-Giro stage race.  The website will try to tell you it starts on 21st July, but don't be fooled, that's just official presentation.  It's a 4-stage race, and all although it's not as hilly as Thüringen, it's still hard racing.

Last year it was won by Lotto's Grace Verbeke, who won the first stage and never looked back.  She'll be back to contest this year's race - and below the jump I'll tell you what she'll be facing.

It's been interesting playing compare'n'contrast with the different race websites this season.  On the women's side, most of the races haven't quite got the hang of sharing information to publicise the race, and while part of that is obviously about funding, it seems mostly strange.  Limousin doesn't have a website that hits the glories of Thüringen (which has videos!  Photos! The best ticker in the world!) but it's still a pretty good site that has lots of fun extras that bodes well for 2010.  I especially like the slideshows of last year's race, and there's a link to radio coverage.

One thing I really like about it is the way they've plotted the stages on Openrunner, so you can have a look at the routes on google maps, and really get a feel for the terrain.

Stage 1 is 118km, from Lissac-Sur-Couze, 4 times round the Lac du Causse, then looping round the hills round Collogne-la-Rouge, back past the Lac and up through 2 sprint points along the river to end in the town of Brive la Gaillard.  It's got the biggest climbs of the race, and lots of small, sharp hills, so it'll favour the breakaway artists and riders who like the descents.  It passes various viewpoints on the map, so would be a beautiful stage to watch...

Stage 2, around Saint-Sulpice-le-Guérétois to is a 17.4km Time Trial, and looks pretty straightfoward. The interesting thing for me on this stage will be how Paralympian superstar Sarah Storey shapes up against her first Pro-Tour competition.  It might be a bit too flat for her, but obviously, I'll be crossing fingers and toes for her.

Stage 3 is 110km from Saillat Sur Vienne through St Junien, round a large loop, back through St Junien, then twice round the smaller loop through Saillat again, ending in St Junien.  It's lumpy, with the largest climb being about 60m, but with a sharp descent on the last loop 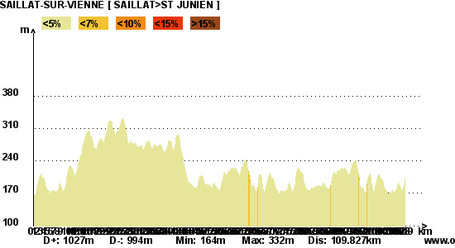 Stage 4 starts and finishes in Roussac, looping around the town, before ending with 4 bumpy laps of the town.  It's likely to be hard and fast attritional racing - by the time they hit the final lap, I'm sure they'll be sick of the sight of the town! 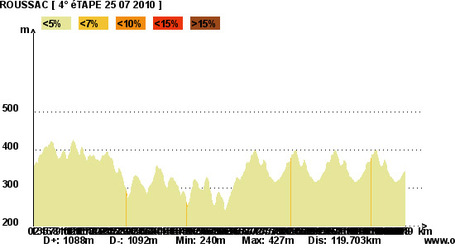 Well, there IS a startlist, but it doesn't look 100% reliable, given that some riders appear twice for different teams, and others are riding at Thüringen - so as with a lot of races this season, we'll only really know once the race starts, and we get the first set of results.

It's got fewer Pro Teams than the German race, with Lotto and Top Girls being the biggest names, but there are some strong teams in disguise.  Assuming they are actually riding, the Russian National Team, with Alexandra Burchenkova (who just won the European U23 Time Trial) and Svetlana Bubnenkova from Fenixs-Petrogradets, and Tatiana Antoshina from Valdarno, who finished 8th overall in the Giro Donne, is pretty formidable, although it might not be hilly enough for them to gain huge advantages.  The Belgian National Team has Ludivine Henrion, who usually domestiques for Red Sun, and Belgian national champion Liesbet de Vocht, who as a rider for Nederland Bloeit, is contractually obliged to try for breakaways wherever possible, or so it seemed.  In the last big race in France, the Tour de l'Aude Liesbet was denied a stage win with team-mate Annemiek Van Vleuten, after being sent the wrong way - and she just won the Dwars door de Westhoek, so what with one thing and another, she'll definitely be one to watch out for.  Nederland Bloeit have been my stand-out team of the season, so it'll be interesting to see how Liesbet does without them.

Other national teams include Team Australia, with Kirsty Broun, Amanda Spratt and Australian National Champion Ruth Corset, Team USA's junior team, with National Junior Road race & TT Champion, Coryn Rivera, Teams Canada and Scotland  - alongside a really interesting range of other teams.  A handful of French teams, Team Asahi from Japan, and my very favourite team ever, Horizon Fitness, home of Sarah Storey and 'Cross star Helen Wyman.  I have been ranting about how amazing Horizon are at the drop of a hat, lately, but if you're somehow missed that, let me know in the comments, and I'll happily do it all over again.  The advantages to both Horizon and Team USA being at the race is that they're very, very internet savvy - Manel Lacambra, the USA DS, has been giving us in-race reports via his twitter for all the races he's been at - and Horizon's DS, Stef Wyman, is likely to be even better, now the team's at pro races.  If there's any kind of internet nearby, there'll be rider blogs, photos, updates and all kinds of home-made media.

As for the big teams, I'll be interested to see Grace Verbeke's form, as Dwars Westhoek was her first big race since GP Valladolid in early June.  If she's well, I wouldn't be surprised to see her win the race again, as she likes the lumpy stages where she can attack and escape.  Her team looks more of the sprinty iteration, with Rochelle Gilmore being the biggest name there - and apart from the Russians, Top Girls' Elena Berlato could be her biggest threat for the overall.......... although when the first stage is over, giving us a final startlist, we could see a whole 'nother set of names!

Feel free to update the thread with facts or things I've missed, and any results, photos, interesting blogs and random stuff you find about the race - the more, the merrier!

Bump - Just a reminder that the local news (19:00 CET) is about to start here complete with a report on how the race is going.