What is it? Uphill finish on the Col du Tourmalet.
Got Climbs? Three's a crowd. Col de Marie-Blanque, Col de Soulor, Col du Tourmalet.
Yellow Jersey Battle: Last chance for the climbers!
Ideal Rider: It's hard to imagine that an early breakaway will survive today, especially because the stage is relatively short. The strongest climber in this year's Tour will likely win the day. Who can challenge Alberto Contador?
@Gavia: The Tour likes the Tourmalet so much that this year, they're doing it twice. Schleck and Contador will fight over the Shirt, while behind them, Sánchez and Menchov have their own battle. There's no way this stage can suck.

The climbing finale of this year's Tour de France! The course includes three major climbs: Col de Marie-Blanque, Col de Soulor, and the Col du Tourmalet. Though the Col du Tourmalet is a frequent feature of the Tour de France, this year marks the first ever summit finish on the Tourmalet. Move over Alpe d'Huez. Unlike the previous stage, this is a classic mountain stage with three major cols and an uphill finish. The winner on the Tourmalet receives the Souvenir Henri Desgranges, named for the inventor of the Tour de France. At 174 kilometers, this stage is relatively short. Anyone who wants to ride well will need to have done some hard training on the rest day. It's the last chance saloon for the climbers, and it's hard to imagine how there won't be attacks on this final ascent of the Col du Tourmalet. 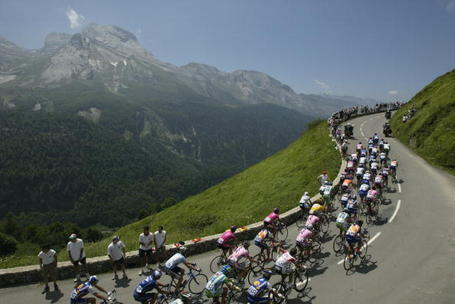 Schleck and Contador Share the Spoils
Andy Schleck tried with all he had to ride Alberto Contador out of the yellow jersey on the final climb of the 2010 Tour de France but he could not ride his rival off his wheel. They distanced all their rivals and crossed the line with Contador graciously avoiding to contest the sprint after following Schleck all the way on the climb, fending off all attacks. Read More

Will Talks Tourmalet! And he should know, he's climbed that bad boy.

Weather Update: Weather reports are calling for heavy rain and temperatures in the 12C range on the Col du Tourmalet. That'll throw a wild card into the mix.

Know Your Tour: What's in a climb?