Title: Boy Racer: My Journey to Tour de France Record-Breaker
Author: Mark Cavendish
Publisher: Velo Press
Year: 2010
Pages: 288
Order: HERE
What is it? The reissued, updated, paperback, US-distributed version of Mark Cavendish's autobiography.
Strengths: Frankness (surprised?); good glimpse deep inside the peloton.
Weaknesses: I'm not sure the book can keep up with the daily-evolving Cav legend.
Rating: **** (4 out of 5) 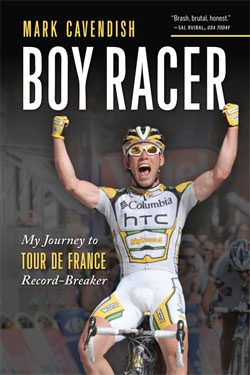 As you may remember, Majope reviewed this book last year when it was issued in Britain in hardcover. I don't want to reinvent her excellent work, so I'll settle for pulling a few quotes:

Love the man or hate him, you won’t find much in Boy Racer to change your mind. It’s pure Cav—honest, outspoken, occasionally aggressive, imbued throughout with that trademark self-confidence you already find either charming or annoying. It won’t give you an in-depth look at what made him the champion he’s become: he touches only briefly on his childhood and personal life (nothing, unfortunately, on his ballroom-dancing days), focusing instead on his meteoric career. The book is organized around the stages of the 2008 Tour de France and his four wins there, with an epilogue covering the Olympics and Milan-Sanremo. Interspersed with details of the struggles and triumphs of the day are flashbacks telling the story of how he got there....

Much of the information is familiar from interviews and profiles in the cycling press—face it, the kid is barely 24 and this is his only his third year as a pro, so there’s only so much ground to cover—but there are nuggets that make this an absorbing read....

Even if you’re not a fan, this kind of peek into the peloton makes the book well worth reading.

I completely agree. There's really nothing to dislike about this book if you like athlete autobiographies. Sure, Cav has the pen and writes a one-sided version of who he is, and in any autobiography the opportunity for whitewashing is undeniable. But he comes off as honest and open, not guarded or scripted by a PR firm, and he knows more about who he is than I do, so I am willing to give him some benefit of the doubt.

Also, take this for what it's worth, but to me much of the 'Cavendish story" rings true. I have two boys, the angelic DS Little Bear mentioned here often, and his little brother (DS Littler Bear), whose emotions are much more raw and close to the surface, and who struggles rather loudly with any perceived violation of his rights. I love them both beyond words, natch, but the point is that I recognize in Cavendish the same explosive emotions, the same tendency to lash out at first and walk back his actions or words later. And in Cav's case, it's all within the highly stressful, somewhat chest-thumping world of elite professional sports. I guess that's my way of forgiving him when he calls us internet forum people (now, with extra derision!) and makes rude gestures.

Anyway, the book's true value is its very detailed insider account of stuff I care about much more: races. One example of this is during a classic Cavendish episode, where he's been told (or perceives himself as having been told) that he can't win Milano-Sanremo because the race had added an extra climb, Le Manie, and Cavendish wasn't enough of a climber to get through this and the other impediments in time. With a mix of umbrage and dedication, Cavendish sets out to prove them wrong by working on his climbing. We all know how this ends, but in the chapter on MSR he talks about the bluffing he did in Tirreno-Adriatico, going poorly on a few climbs for the cameras to lower the public expectations. Cav takes us through his building support with his team, who harbor the same doubts until Cav tells them he thinks he can do it. He describes the experience of summitting the climbs, talks about what was happening well behind the scenes, describes the feeling of victory after, etc. All great stuff.

Lastly there is new material which sheds light on this season -- talking about his victorious Tour from 2009 and his problems over the winter. It's a bit awkward at times to note that he left in some of the loving tributes to Melissa, his then (now former) girlfriend. But in the Epilogue he rather quickly dispenses with that matter, omitting the juicy bits out of respect for her privacy. I suppose that's better than going back and scrubbing her from the book, since she was clearly part of the events when they happened. Anyway, if you read the original version, there are some valuable parts to it, though 95% of the book remains unchanged. And if you missed the first publishing entirely, I consider it well worth a read.