Share All sharing options for: Know Your Tour! Stage 17: What's In a Climb? 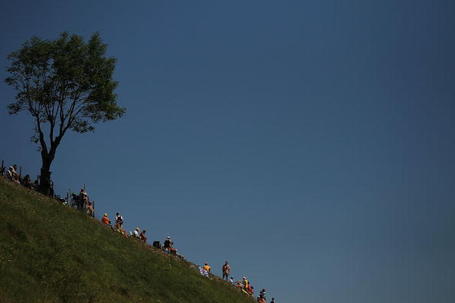 Thursday's Queen Stage of the Tour de France is the day we've all been waiting for. In fact, that's basically the definition of a "queen stage:" the day everyone is unofficially waiting for. The race will end on the Col du Tourmalet after climbing the Col de Marie Blanque and Col du Soulor. The stage profile looks like the race will climb up a few sheer cliffs, but then all profiles kind of look alike, or at least equally hyperbolic. A slightly more informative bit is the climb rating. There is actually a category 4 climb early on, the Cote de Renoir, where I am guessing the first man to

the top wins an original Renoir painting. Or at least a poster. Anyway, cat-4 climbs are no big deal. "Cote" means coast, from the pre-automobile sensation of coasting downhill on your sleigh. It's a hill. Next up are the two category-1 climbs, the Marie-Blanque and the Soulor, where the going will get tough for probably all but the elite riders. Then, at long last, accounts will be settled on the Tourmalet, rated hors categoire or above categorization. This is all you need to know, right?

Of course not. HC climbs are the highlights of any grand tour, at least when they come at or very close to the finish. But these ratings are far from precise. There is no recorded system for giving out ratings, and the Tour has occasionally rated the same climb a cat-1 when it appears early on and HC when it appears at the line. Arbitrary? Not exactly. Where a climb occurs in a race is one of several basic objective criteria you need to look at to judge how hard a climb will be. Here's another in my series of nonexhaustive lists:

This jumble of factors leads to no obvious system for comparing climbs. The Mortirolo is very long and steep, but Mont Ventoux has high winds, sometimes. The Stelvio has 52 switchbacks, but the Angliru has ramps over 20%. The Tourmalet is higher than Luz-Ardiden, but most years the Tourmalet isn't the last climb and Luz-Ardiden is. Etc.

Our own WillJ published a system for ranking the climbs before the Tour, looking specifically at every climb in this year's race, as well as some not included for point of reference. You can find another ranking system at climbbybike.com (very cool site). These are general rankings for regular folk to use when planning their own ride, so they don't account for a climb's position on a Tour stage. Regardless Will's system is all you need for now. Ranked #1 is tomorrow's finish on the Tourmalet, the western approach. Ranked #4 is the other side of the Tourmalet which the peloton did on stage 16. Yep, just because it's "the Tourmalet" doesn't mean it's even the same ride. There are I think three or more approaches up Mont Ventoux, for example. The beauty of Alpe d'Huez is that there's only one version. Also, it's harder than what most mortals can stand. Like the other climbs on this list.

Even armed with this objective data, however enlightening it may be, you still can't reliably predict what will happen. Part of the issue is that each individual rider likes some types of climbs better than others. They all say they like hard climbs -- at least, the guys who can climb and drop people in the process -- but a generic difference is that some guys like the Pyrenees, with its shorter, less consistent climbs, better than the longer, straighter drags up the Alps. Some guys love one particular ascent, or dread another one, even while being OK with reasonably similar climbs. The top guys like Schleck, Contador, or Lance in his prime seem to do well everywhere. But down on the next rung, guys like Leipheimer, Menchov and others might show some much better results in the Pyrenees, while Basso or Wiggins might say they prefer the Alps where you can get into more of a rhythm and hold on for a long time.

Another unanswerable complexity, I know. The good news is, if you can make it to France and get your hands on a good bike, you can find out for yourself what climbs are hard and which ones are hard.