What is it? A day for the sprinters.
Got Climbs? Nothing to see here, move along.
Yellow Jersey Battle: Phew, finally a day off.
Ideal Rider: Unless he left his legs in the Pyrénées, Cavendish should romp on this one.
@Gavia: A sprint stage into the wine country. Hey! Pass that bottle over here. No hogging the vino!

This stage offers a reward for the sprinters who have survived the mountains and a day for the general classification riders to rest their legs ahead of the long time trial. There are no categorized climbs on the route between Salies-de-Béarn and Bordeaux. Though an early breakaway will certainly go up the road in search of television time, the sprinters' team should have little difficulty bringing them back. The roads this area are relatively narrow and tricky, which may give the escapists a better chance than it may appear from the profile. Still, it will take a massive miscalculation from the sprinters to let this one get away. With only the Champs Elysées left for the sprinters, the Green Jersey competition should give them added incentive to chase. The bigs, meanwhile, will be chilling ahead of the final time trial, which will decide the overall classification once and for all. 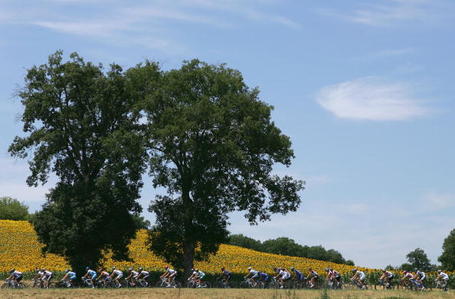 Cavendish Unbeatable as Hushovd Falters
Mark Cavendish won today's stage 18 to Bordeaux in dominant fashion, easily coming around the Cervelo Test Team train set up to help Thor Hushovd remain in the green jersey. Hushovd meanwhile needed a lot more help than a train, getting swamped in the sprint and finishing a disappointing 14th. As a consequence, Alessandro Petacchi of Lampre, third on the stage, has resumed the lead in the points competition... Read More

Know Your Tour: Coming Off the Mountain