What is it? Long flat time trial, 52 kilometers against the watch.
Got Climbs? Nope.
Yellow Jersey Battle: Last chance to win the Tour, today we learn who will wear Yellow in Paris. Only eight seconds separate Alberto Contador and Andy Schleck, but Contador has always ridden better against the watch. Meanwhile, Denis Menchov will chase Samuel Sánchez for the final podium step. Sánchez has 30 seconds advantage over the Russian.
Ideal Rider: Tony Martin. At the Tour de Suisse, Martin beat World Champion Fabian Cancellara in the final time trial.
@Gavia: The clock, she is cruel, and time waits for no man.

This year's Tour boasts only one long time trial, which is something of a rarity in recent Tour history. More typically, the race includes two long time trials, much to the dismay of the climbers. At 52 kilometers, this time trial runs over almost entirely flat terrain between Bordeaux and Pauillac. The course begins in the city center and runs along the Gironde river into the rich vineyard lands that surround Bordeaux. The finish in Pauillac is not far from the famed vineyards of the Haut-Médoc.

The riders will have no time for wine-tasting, though, as this test is easily long enough to alter the overall standings. No one will come from tenth to take the Yellow Jersey, but certainly it's possible for an on-form rider to move up the general in 52 kilometers of racing. That's a long time alone in the wind. Typically, the general classification riders finish better in these third week tests than the time trial specialists, so World Champion Fabian Cancellara is not necessarily the favorite for the stage victory. If the climbers haven't used the high mountain stages in the Pyrénées to cement their advantages, they could find the Tour slipping away from them on the flat roads of Bordeaux. The race for the Yellow Jersey ends here, and by the time all the riders reach Pauillac, we will know who has won this year's Tour de France. 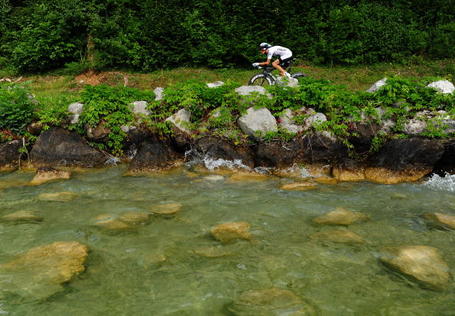 Alberto Contador of Astana got a real scare from Andy Schleck of Saxo Bank today, seeing his eight second advantage nearly disappear on the road of the 53km time trial today in the early stages. But Contador had plenty left in the end and reclaimed seconds as the race wore on, resulting in Contador winning the Tour de France for the third time in four years. Schleck's performance was an upset, or maybe it was the high expectations for Contador, but either way it made for great drama on the road, and it failed to put to rest the debate over Contador's attack on stage 16 when Schleck lost 39" to a chain drop. Ultimately, though, while Schleck was inspired, Contador rode a very smart race, not panicking and riding better over the latter half of the race. Read on!

Know Your Tour: The Race of Truth!