Last week I gave you some ways to win online arguments using women cyclists, with my, erm, "tribute" to the world of Top Trumps.  Which may have been a mistake, because Gavia, hard task-master that she is, immediately said she wanted some more!  So here are 5 National Champions - make sure you memorise everything and use these facts well (you never know when there'll be a surprise test!) 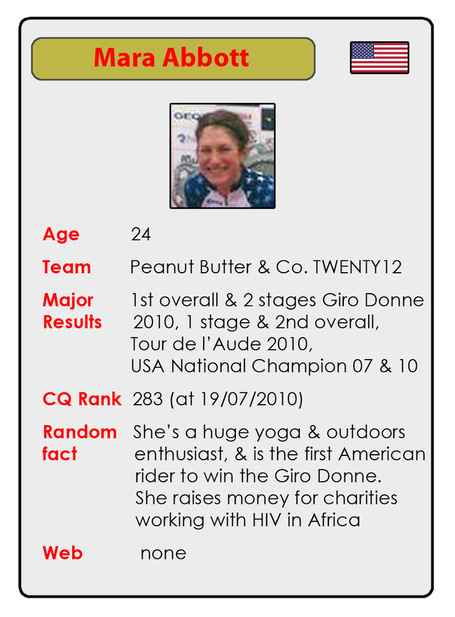 When I first saw the news that Mara Abbott was leaving HTC-Columbia after just a year, I was full of mixed feelings.  She left to join Peanut Butter & Co. TWENTY12, a American domestic team, with the ambition of getting young American riders to the Olympics.  On the one hand, it sounds like a great project - and who doesn't love a jersey with a monkey on it?  But on the other hand, Mara interviewing about how glad she was to be able to spend more time at home implied we wouldn't get to see her fabulous climbing skills over this side of the Atlantic.

Luckily for fans of mountain goats, she's been riding a reduced European season as part of the USA National Team.  While this does deprive us of monkey jerseys (and having everyone in the same Stars'n'Stripes jerseys deprives us of some epic jersey madness), it's made for exciting riding - especially the mountain duels with Cervélo's climbing supremo, Emma Pooley in the two biggest and hardest races of the year.  In the Tour de l'Aude, they had 2 stages where they broke away together, taking one stage each, with Emma winning the overall race.  For their rematch in the Giro Donne, once again they ended up out ahead on the two huge mountain stages - including one finishing on the legendary Stelvio - but this time Mara was stronger, and won both, becoming the first American to ever win the Giro Donne in the process.

She's back in the USA now, and it's not clear if there'll be the chance for a 3rd round in the battle for who's the best climber of 2010 - but it seems like a great way to run a season, staying close to home with lots of wins on the domestic front, just nipping over the Atlantic for the major races, and taking the USA national title in the process.  For 2010 I'd love to see PB 2012 riding races over here (with a stars'n'stripes'n'monkey jersey, naturally!) - but I forget Abbott's still young - there's plenty of time ahead of her to take things slowly, and as a rider who seems to value getting the balances right in her life, and being able to do more than just race, I'm glad she's found a way that suits her.

Below the jump, I'll show you some more! 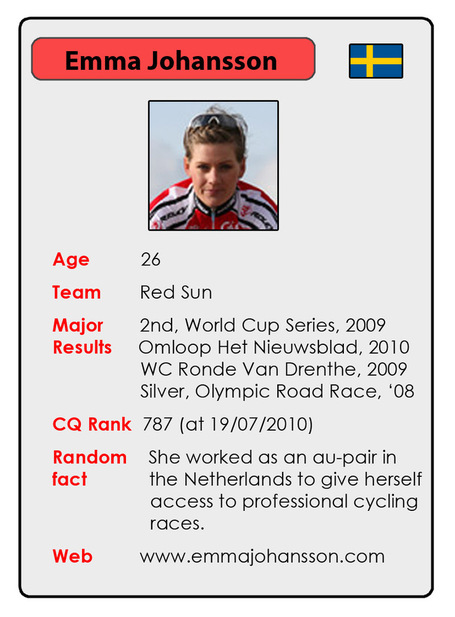 Emma Johansson is such a great rider to have around the péloton.  On paper, it looks like Cervélo and HTC should be dividing the seasons between them - they're just so much better resourced than the other teams, with hugely strong rosters - in theory it should be those two tossing coins for 1st and 2nd, with the other teams racing for 3rd.  Luckily for us, it doesn't work out like that, and Johansson is a great example of what stops it.

RedSun isn't anywhere near the same level as the Big Two (you *can* see their website here, but you're better off reading Monty's profile of them) but Emma seems to be able to make up for it all by herself.  She's perfect for the hilly Classics, which is why she ended up in 2nd place overall in the 2009 UCI Road World Cup Series (last year 10 day races held throughout the season), and she's always a rider to watch, wherever she's racing.

She's also part of the exclusive club of riders who've been interviewed by Gavia - here's Emma's interview from back in January - and there should be an extra UCI category of fabulousness for those riders, because isn't it great that riders will take time out to talk to fans like us?

I think a lot of us were assuming that Nederland Bloeit would be a similar set-up to RedSun, with a set of riders there just to make up space, while Marianne Vos did her own thing (ie burning up the roads and winning pretty much everything).  But they've been such a strong team this season, and the fact that they've got  2 National Road Race jerseys and 1 National TT jersey, in a team that's all Dutch but for Liesbet de Vocht, is just the tip of the iceberg.  My theory is that all the riders are contractually obliged to attack like crazy at the drop of a hat - which adds a lot of fun to every race.  Ronde van Drenthe was a great example of this, and Loes' win out of the group with 3 Cervélos and sprint star Giorgia Bronzini was a beautiful piece of attacking riding.

Liesbet has been having an especially strong last few weeks.  Back in May, she was denied a 1st/2nd stage place when she and team-mate Annemiek Van Vleuten were mis-directed in the Tour de l'Aude, so that should really be added to her palmares - but these 2 are definitely riders to keep an eye on, because there's plenty of time for more Bloeit-based happiness before the season's over. 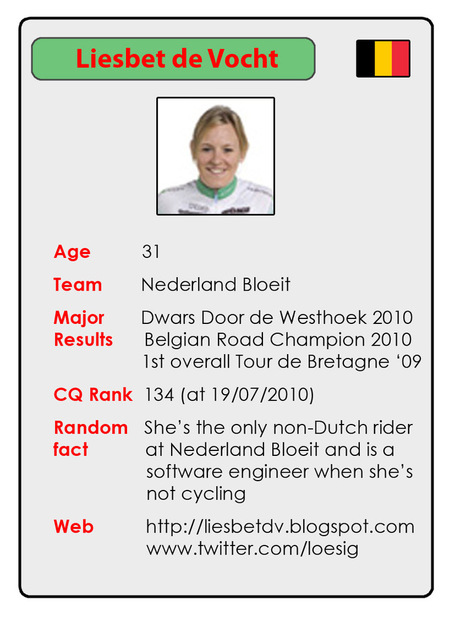 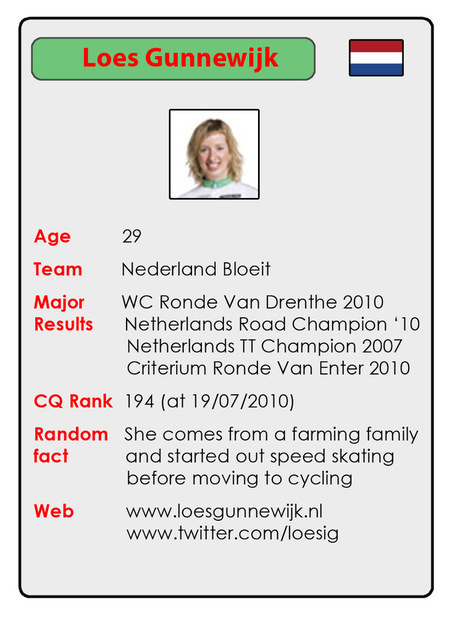 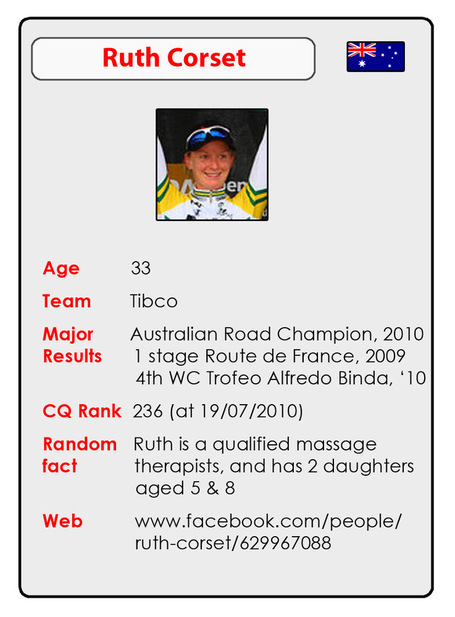 Australian National Champion, Ruth Corset, is another rider who rides a reduced season, balancing cycling with being a parent (which, like everything, seems a whole lot easier for the men to do) and wearing 2 different jerseys in the races she does ride.  Her main team is Tibco, but she can also be found riding for the Australian National Team, as in this week's Thüringen-Rundfahrt.

I'm never going to describe myself as an expert on women's cycling ("fangirl" is the word I'd use) but I know even less about the Australian riders than I do everyone else.  Except they all seem tough as, with senses of humour about the whole cycling life.  So if you know more about Ruth (or any of the other riders, for that matter) please, please share it in the comments.  What I do know is that she'll be one to watch for the World Championships.  She finished 14th in 2009, due to mechanical issues that prevented her from contesting the race as much as she'd wanted to - so on home territory, in front of her friends and family, she'll have even more to prove.