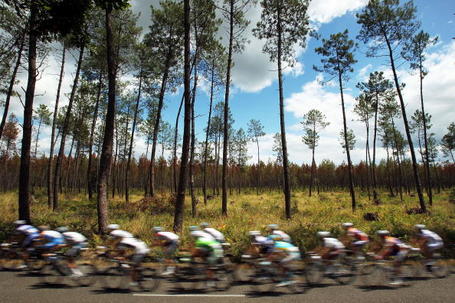 Mark Cavendish won today's stage 18 to Bordeaux in dominant fashion, easily coming around the Cervelo Test Team train set up to help Thor Hushovd remain in the green jersey. Hushovd meanwhile needed a lot more help than a train, getting swamped in the sprint and finishing a disappointing 14th. As a consequence, Alessandro Petacchi of Lampre, third on the stage, has resumed the lead in the points competition and is now one stage (ignoring the time trial tomorrow) away from joining an elite group of riders to win the points competition in all three grand tours. Petacchi holds a ten point lead (213-203) over Hushovd, winner last year, while Mark Cavendish has become an outside threat to win or at least 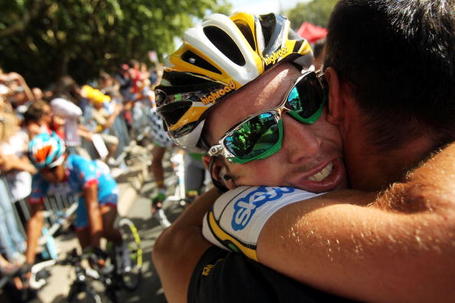 overtake Hushovd at 197 points. This is, quite simply, the best points competition the Tour has seen in several years.

No change in the overall, of course. The KOM competition is over and the young rider is probably as well. One other classification worth watching is the team competition. Right now, The Shack leads Caisse d'Epargne by 8.30, not an insurmountable lead by any means with a 53km time trial tomorrow. Remember, the team competition takes time from the top three finishers. The Shack probably has three better time trialers than CdE but it ain't over til it's over.