This is by far the best Green Jersey competition since 2003, when Baden Cooke pipped Robbie McEwen by two points, finishing second on the stage to McEwen's third and reversing a two-point deficit. During the stage McEwen upped his cumulative lead by winning the first intermediate sprint over Cooke, saw it cut back to two points when Cooke won the second intermediate sprint, then saw it all go up in smoke in the battle for second on the stage behind JP Nazon. Incredible stuff. This year could be almost as good, though probably not. It really doesn't get any better than that, and this is even before you account for the fact that they're both Australian, which means they almost certainly got really drunk at the post-Tour party, had a huge brawl, and then went on vacation together with their families. Anyway, there are now only three guys in contention, so I'll focus on them, though hats off to JJ Rojas Gil (4th overall at 167), McEwen (163), and Edvald Boasson Hagen (153) for strong campaigns.

Despite my current rankings, the fact is that this race is a complete tossup. Hushovd benefits slightly from Tyler Farrar's withdrawal today, and if a few more sprinters step off the bike, there simply won't be as much traffic between him and Cav-Peta 1-2 on the big sprint finales. Which totally blunts Petacchi's advantage (and Cav's too). I'll stop now before I talk myself out of the ranking.

Path To Glory: Second, second second. Petacchi can pretty much salt it away if he can stay close to Cavendish in the final sprint, but only if he shows up for the two intermediate sprints, which are almost certain to showcase the top guys, as opposed to a breakaway, since there's so much at stake and the intermediates don't happen until they start the circuits of the Champs Elysees. If Cavendish gets 12 points before the final gallop, Petacchi is in fact toast. Petacchi has already mentioned the fight for the intermediate sprints today in post-stage interviews, and he's no rube.

Prediction: I think he just hangs on. 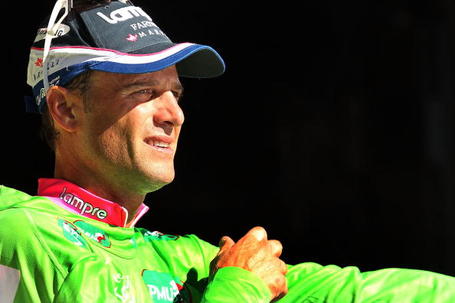 Assuming he wins in Bordeaux and Paris, Cav still needs a few more points to win green, and that assumes Hushovd is stuck in the barn in those early stage sprints. Will Cav give up and just focus on the stages, or will he unleash his formidable army of a team to help chase those intermediate points and block Hushovd? This could get very interesting.

Path To Glory: And so it has. At this point Cavendish's dominance of the final sprint is beyond dispute. Put those 35 points in his column now. I no longer believe that chasing intermediate points could have any  Obviously sprinting head to head with Petacchi for the intermediates will be worthwhile, but Cav would then have to count on Petacchi messing up in the finale. Another pathway would be for his leadout to steal points from Petacchi. If HTC can get 1-2, or if somehow Thor can come along and crowd out Petacchi, then Cav is in play. The man for the job is Bernhard Eisel, a pretty fair sprinter. He can't beat Petacchi head to head, but maybe there's a way to send him up the road, get Petacchi to chase, and have Cav come around both just in time for Petacchi to get third or worse. Tricky, but nothing to lose.

Prediction: Bollocks! Though you can start sizing him up for green in 2011 now.

The big question, then, is whether Hushovd can use tomorrow to get completely away from Petacchi and take points on a day when the Italian isn't there at the end. If he does that, it's over, Thor wins. If not, Hushovd will have to take intermediate sprints on several occasions in the Pyrenees to pad his lead enough for it to stick.

Path To Glory: Petacchi has to get kicked out of the Tour for doping. Well, there are other mathematical possibilities, and a crash can bring about all sorts of crazy results. But sadly I think he's done. It's too bad -- I won't take his bait about stage 2, but I do feel sorry for the guy that he (apparently) wasn't able to complete his sprint training this year thanks to injuries and whatnot. I would have preferred to see Thor at his best, even if I wasn't rooting for him.