Know Your Tour! Stage 19: The Race of Truth

Share All sharing options for: Know Your Tour! Stage 19: The Race of Truth 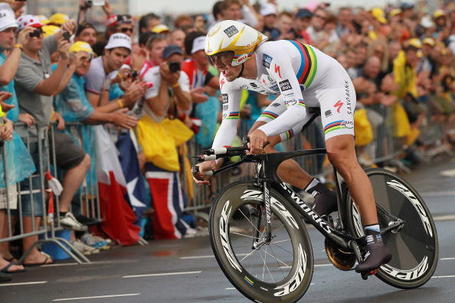 Saturday features the time trial that, as usual, definitively settles the race for the Maillot Jaune, as well as the best young rider and team classifications. Technically, things are very much in doubt, with Alberto Contador maintaining a slim eight second lead coming into the stage of Saxo Bank's Andy Schleck, but Contador has proven himself to be the superior time triallist and is expected to win handily in their two-man battle. Maybe the stage too.

The reason why the time trial is given such a prominent role in deciding the outcome is that this discipline has long been known as the "race of truth." Maybe not ultimate, comprehensive truth -- strong riders can be lousy time trialists. But the corollary is never the case -- lesser riders have no chance in the race against the watch. This is the discipline for guys who pack a lot of power.

Some technical stuff: Saturday's event is 53km. This is about as long as a time trial ever gets nowadays. The Giro had a 62km event last year, one of the hardest bike races ever (won by Denis Menchov, hint hint), but typically something in the 50's is the magic number for the Tour. This distance sets it apart from almost every other race, as the Giro and the Vuelta tend to utilize time trials in the 25-40 km range. One reason 50km is a magic number is that some guys (Sammy Sanchez comes to mind) are potential winners in the shorter events, but get weeded out in the 50km range. [Or, have, in the past. Sammy could shock me this time around.] In short, even among the race-of-truthers, the 50km distance is for the truly elite. Befitting of the Tour de France.

I can think of a couple reasons why some great riders like Andy Schleck aren't great time triallists, which is a good way of reviewing what it takes to win. On the flip...