What is it? Party in Paris!
Got Climbs? No.
Yellow Jersey Battle: So over. Time for champagne and podium kisses.
Ideal Rider: Mark Cavendish. The British sprinter won by several bike lengths last year. It will be difficult to stop him from winning again.
@Gavia: Hey! Quit hogging the champagne!

At last, we come to the final stage of this year's Tour de France. The race finishes with the traditional circuit on the Champs Élysées. The Yellow Jersey, his work is done, and the winner of the overall classification will sip champagne and enjoy his day in the sun. For the sprinters, this stage is serious business. The sprint on the Champs Élysées is one of the biggest prizes in the sport for the fast men, and it's the only reason to drag their big legs over the high mountains. The finishing circuit is flat and fast and raced over the smooth cobble stone surface of the famous boulevard. As they enter the tunnel under the Seine, the sprinters' teams will jostle for position. Then, it's a curvy romp through the Place de la Concorde to the finishing straight. It's always fast and furious. 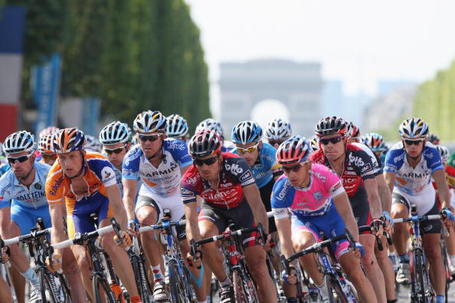 Once again Mark Cavendish crushes everyone on the Champs Elysées to win the final stage of the Tour de France. This time he did it almost on his own, blasting by the the competition on the final meters. Read more

Know Your Tour: Is There A Race Today?