Share All sharing options for: Top Trumps 3: 6 Riders who blog

Part 3 in my home-made Women's Cycling Top Trumps is a tribute to those riders who help us follow the races through their blogging and twitter accounts.  These aren't the only ones - it feels like the 2 necessities of a hotel for the cycling world are air con and wi-fi - but these are riders who are (mainly) loyal domestiques who don't necessarily show in the results, as they're working their backsides off for their team leaders, and then go home and tell us all about it.  They all deserve medals - when I run the UCI, there'll be a special jersey at every race for the best home-made coverage. 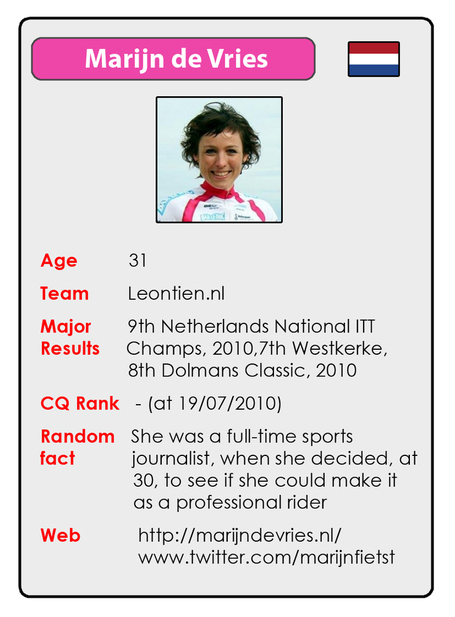 Marijn de Vries was a well-known sports journalist and editor of Holland Sport, who had been riding at club level when she decided at age 30 to see how far she could make it in professional cycling.  She signed to Leontien.nl, the team set up by former Dutch Road & Track World & Olympic Champion Leontien van Moorsel, and has been blogging about her adventures ever since.  There's more than a touch of "why the hell am I doing this?" about her blog, and she doesn't pull any punches about the realities of life as a cyclist (from natural stockings to saddle problems) - but as you'd expect from a professional journalist, she always tells it very well.  It's my hope she'll end up writing a book about it, but in the mean-time, there's her blog (with photos too) and her twitter.  And if, like me, you're learning Dutch via the medium of cycling, 'Cross and Sporza, you can pick up the BEST words!

Now, you might be thinking that's the weirdest way to get into pro cycling there is, even more than Joao Correia - but I can go one better - follow me below the jump and I'll give you a rider with a more extreme story.... 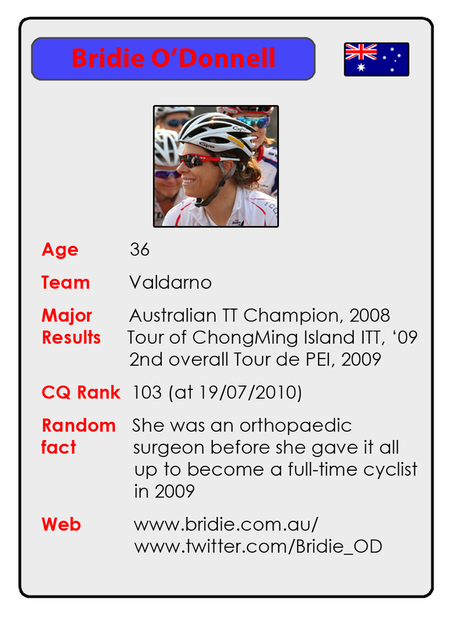 Oh Bridie.  She doesn't blog as much as I'd like, but when she does, it's hilarious - and she makes up for it with her twitter feed.  She was a 33 year old orthopaedic surgeon in a private hospital in Australia, when she decided to give it all up to move to Italy to be a domestique.  Now, I'm assuming that being a surgeon in Australia is as lucrative as it is in the UK, so it's a bit of a lifestyle change to move across the oceans to end up sharing a bedroom with a 9-year-old girl....

She'd been a rower and a triathlete, before she put herself forward for the Australian talent identification programme in 2005, and ridden for the Australian National Team before being signed for the 2009/10 season by Valdarno, the team sponsored by the Italian prison service (of course!) so presumably she can line up a career in correctionals, if the cycling doesn't work out.

I can never work out if it's only Bridie that the crazy things happen to, or if she's the only one who gleefully tells us all about it (I particularly liked her getting lost in the Ronde Van Drentheand ending up in the middle of a re-enactment of a WWII battlefield...) - but she's always worth following.   She runs a nice side-line in blogging for Australian sports pages - Back Page Lead and Cycling Central - and you can follow her twitter for added comedy moments.  Apparently she has her sights set on riding for Australia at the London Olympics in 2012, so hopefully we should get another few years of Bridie-based fun... 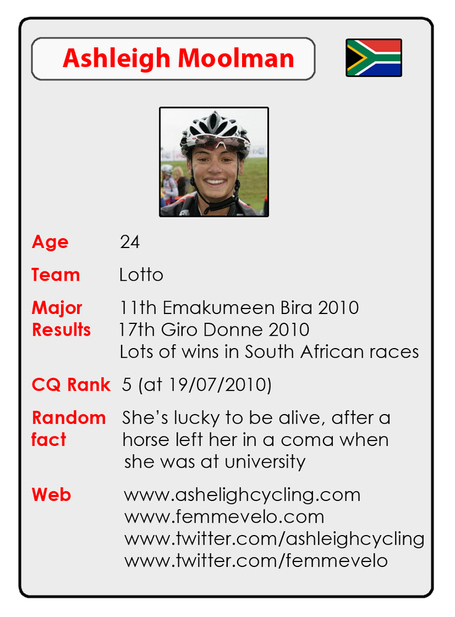 Ashleigh Moolman Pasio had been winning races all over her native South Africa with Toyota, before being picked up by Lotto in a mid-season transfer.  Which is great for us, because she's definitely a rider who loves the sport, and has embraced the internet as a way to share that love.  She's got own personal site and twitter, as well as the fabulous FemmeVelo site ("very fast girls") which gives women's cycling race reports, photos and magically updates on twitter while she's in the middle of a race! (I suspect her husband Carl might be behind that).

She's also definitely a name to watch for the future - her results in her first big European races have been impressive, and with Grace Verbeke not riding, she's been sharing team-leader duties with Vicki Whitelaw.  It feels like she's just getting started on the pro scene, so here's to lots of fabulous results - and blogging - from her in the future. 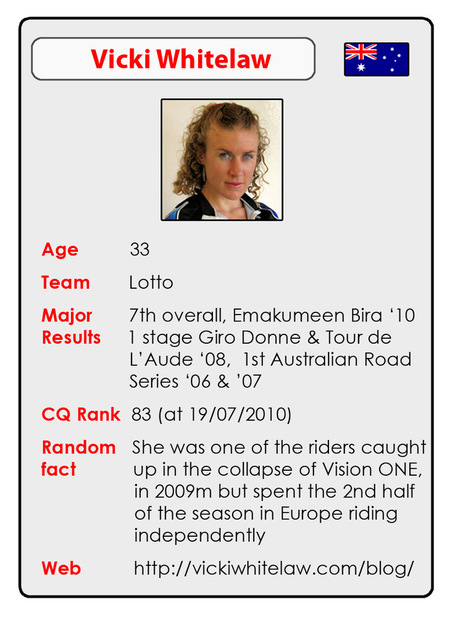 Vicki Whitelaw is a superb mountain domestique, who also rides for Lotto.  I think it was Monty who described her as a female Jens Voigt here a while back, and that seems to fit perfectly.  She says she took up cycling because

"I found running was hurting my knees, therefore I decided to go with cycling which is a lot more egalitarian- it hurts everything!"

and she's only be riding with the pro peloton since 2008.  She's another one of these high-achieving cyclists (that's a bit of a theme with today's riders), and in her spare time she's a soft tissue therapist - as well as blogging on her races.  We're doubly lucky with Vicki, because when she can't manage it (it's hard to imagine, but there are times like when she's just ridden up the Stelvio with an injured leg, when she doesn't get to the blog) Mr Vicki Whitelaw steps in and does a fabulous job too.

She doesn't necessarily always have the best luck, what with injuries and getting caught up in the whole Vision 1 thing (I'd post a link, but I've never seen a proper explanation of what happened - it was a team set up around Nicole Cooke, DS-ed by Stef Wyman, and it fell apart half way through it's first season), but providing she can stay injury-free, keep an eye out for her in the World Championships, and every race that starts to go uphill...

The last two are riders who rode the Giro Donne for the first time this year, and I've included them because their blogs give a real insight into what it's like to ride in the pro peloton.  Lisa's blog has more of the comedy, what with making mistakes in the grupetto, and getting confused on the final stage (Bridie Junior, maybe?), and I'm hoping she gets more time off her other full-time job to ride for Team Aus, so we can have a bit more of that.

Alison Starnes has mostly been riding the USA Domestic Circuit with Tibco but was riding the Giro Donne with Team USA .  Unfortunately she recently fractured her hip riding the Cascade Classic, so I'm not sure if she'll get to ride again this season - here's to her healing fast and well, and getting back on the roads soon and successfully.  You can send her "get well soon" messages via her twitter. 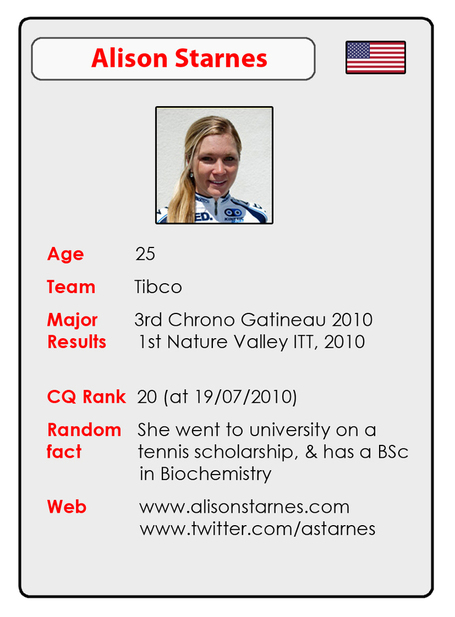 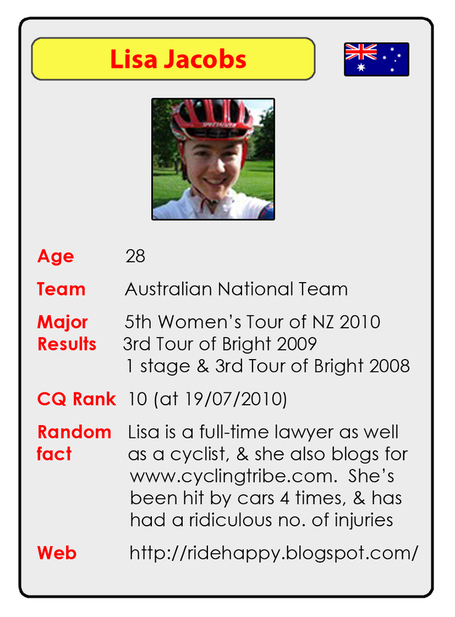 Of course, there are many, many more riders out there blogging and tweeting and generally sharing their cycling lives with us - and it's great to get an insight into how hard they work for the sport.  A good place to look for more is CQ Ranking's page of the cyclists' twitter accounts & webpages.  A special mention goes out to Monique van de Ree, who when she blogs, gives us photos and a fun perspective to compare and contrast with her team-mate Marijn's - it's just that she's taking a blogging break for the moment, so she'll turn up in my deck at another point.

Next up: sprinters!  And if you missed them, follow the links for Part 1 and Part 2