The Duel: How Contador Made a New Friend and Won the Tour

Share All sharing options for: The Duel: How Contador Made a New Friend and Won the Tour 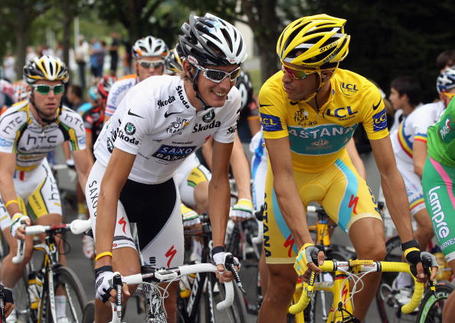 You wake up each morning to a bike race, as if the riders had spent the night trapped in a perpetual motion machine, just waiting for you to lift the lid and peek inside. What will they do next? Lift the lid, turn the crank, watch them dance.

Of course, the Tour is no automaton, and presumably the bike racers spend their nights all tucked into their bike racer beds with their blankies pulled up under their chins and their iPods singing them sweet lullabies. Racing a bike requires strong legs, but the strongest rider doesn’t always win. Often, the outcome hinges on the interplay of personalities. It’s a game of the mind as much as it is of the legs.

This year’s Tour brought us a two-way rivalry of the sort we haven’t seen in some time. The nature of the grand tours ensures that typically only a small number of contenders have a real chance of winning and often one rider seems to ride on a level far beyond anyone else in the race. This time around, we lucked out. The Tour gave us a battle of near-equals between Andy Schleck and Alberto Contador. The leading two reached Paris with only 39 seconds separating them after a three week circumnavigation of France. That’s close. How did Alberto Contador win the Tour? He won with a combination of legs and guile and more than a smidgeon of bluff.

A stage race is never won in one moment, and we can trace the story of the Andy and Albi rivalry through the Ardennes, over the cobbles, up the high mountains and finally, against the watch. But in a race this tight, small things count in large amounts. The moment when Andy Schleck dropped his chain on the Port de Balès has received its share of attention, especially as the gap at the finish of that stage 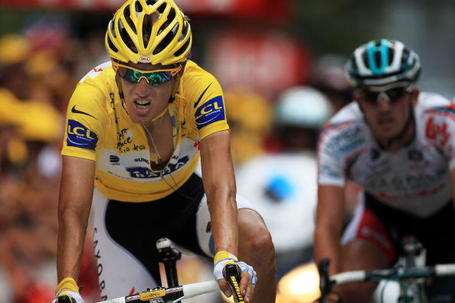 matched almost exactly the winning margin in Paris. Maybe Schleck’s poor gear choice on the Port de Balès lost him the Tour, but even had his attack succeeded in distancing his Spanish rival, Schleck had still a long descent to race to the line. Time would not have stood still at the summit of the Port de Balès, and with everything to race for, Contador may well have paid back any deficit.

Of course, Schleck’s dropped chain also provoked a nearly endless debate over etiquette and rules, both unspoken and not, as Contador chose to race rather than wait for Andy to sort out his bike. It was a calculated gamble from the Spanish rider, who began this year’s race with two previous Tour victories. Contador gambled that Schleck would not find opportunity to exact revenge. In stage racing, tactical decisions are always a balance between immediate advantage and long-term costs, and even cycling’s unwritten rules pay tribute to this reality. Polemica is temporary, victory is forever.

But the more revealing moment in the rivalry between Contador and Schleck came the day before on the climb to Ax-3-Domaines. Andy Schleck attacked, Contador covered. Then, the two riders came nearly to a stop as Schleck tried to force Contador to cooperate and ride with him. Contador refused. The race regrouped and soon a small group went up the road, a group that included Samuel Sánchez and Denis Menchov. 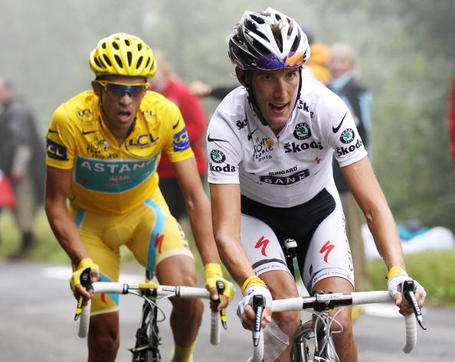 Both Sánchez and Menchov stood to climb the classification if they romped up the road and ran out the clock. Menchov in particular can turn out a mean ride against the watch, and couldn’t be allowed any advantage in the mountains. Behind, Schleck tried to force Contador to ride. Though Sánchez was making a run at Contador’s second place, Schleck held the Yellow Jersey of race leader. You want to win the Tour? You have to defend it, Contador seemed to say, I’m not going to do it for you. Schleck wanted Contador to defend his second place. Contador was having none of it.

It was a classic bluff. Contador rode as if he was willing to lose in the hope of forcing Schleck to help him win. It worked. The next camera shot showed Schleck chasing down the lead group with Contador glued to his wheel. Schleck never seemed to make an attack to drop his rival. Maybe he believed it wouldn’t work. Though Schleck looked stronger on the road that day, the moment showed Contador’s dominance. In the game of the mind, Contador held the upper hand. Schleck, though nearly equal on the road, raced believing Contador was the stronger rider. It was a bluff that held all the way to the final time trial.

Conventional wisdom had it that Schleck needed an advantage of two minutes before the final time trial. On the Col du Tourmalet, he believed he faced a monstrous task of extracting a significant time gap from a rider who raced through the mountains as his equal. Schleck attacked with 10 kilometers to race, but never could shake his Spanish shadow. 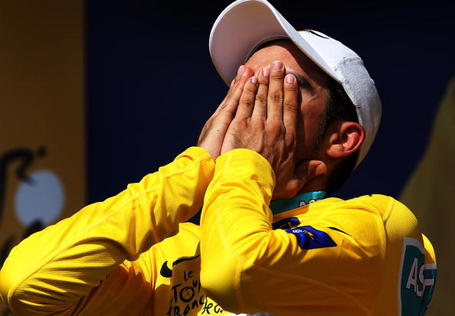 Contador sat on, and as with the the race to Ax-3-Domaines, Schleck proved unable to drop him or convince him to contribute to the tempo.

It was a curiously tense finale on the Tourmalet. Contador’s decision not to contest the sprint seemed an anti-climactic finish. I think it likely that he hadn’t the legs and felt lucky to have reached the finish on equal time. But the illusion of dominance remained as evidenced by the widespread perception that Contador had given the stage win away, a stage win he could easily have taken if he’d wanted. Maybe, maybe not.

In the end, Schleck needed 40 seconds, not two minutes to win the Tour. If Schleck had ridden believing he was the dominant rider, how might the race have played out? If he’d known he only needed 40 seconds rather than two minutes, would Schleck have attacked harder on the Tourmalet? We can’t know for sure. It’s these human relationships, and the tactical choices they force that gives cycling its special fascination. This rivalry between too so closely matched riders was the gift of this year’s Tour, and it’s a gift that may well return again next year. Sometimes, it’s possible to believe that Santa Claus exists after all. 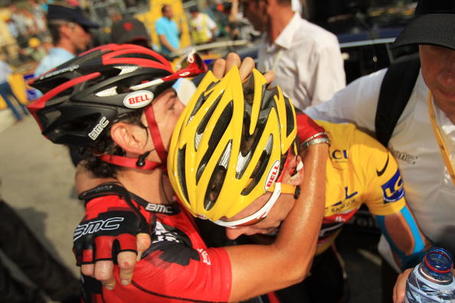 Could there be any more human moment than the desperate fight of the Australian to hold the Yellow Jersey after crashing and his team-mate Mauro Santambrogio’s impassioned effort to help him? The sport is beautiful in both triumph and heartbreak.

And so this year’s story comes to an end. There’s no bike racers riding around inside my computer, as it turns out. They’ve all gone home, at least until the next race. Too bad July only comes once a year, though perhaps we’d all go numb from a surfeit of drama. Is it possible to have too much of a good thing? As I reach for another espresso, I’d have to say no. When’s the next race?