Share All sharing options for: Top Trumps 4 - the sprinty types

I've already mentioned Ina-Yoko Teuntenberg in part 1 of this series, but when she's riding the European scene, who is she racing against? 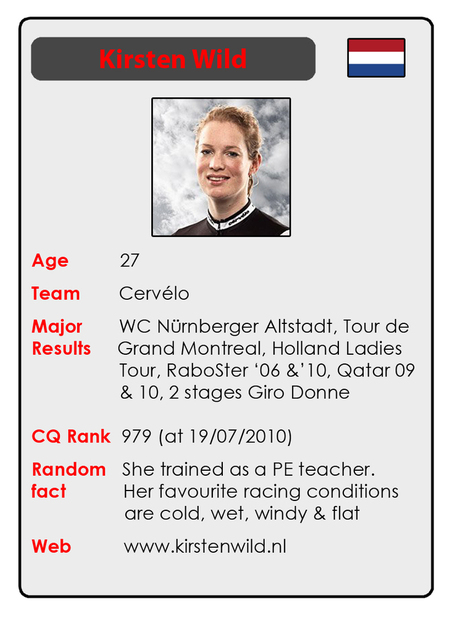 It feels like half the peloton are Dutch - and more than half the sprinters - but Kirsten Wild is THE pre-eminant Dutch sprinter.  She says she likes the races flat, windy, rainy and cold, which is especially useful for races like RaboSter Zeeuwsche Eilanden - which is why she's won the race twice, and at least 6 stages over the years.  She's also particularly strong at the flat Time Trials.

You can check out her other palmares here - and you can generally spot her as she's one of the tallest riders in the peloton, which will be very useful, come the Road World Championships!

Below the jump, some more of the Very Fast Girls! 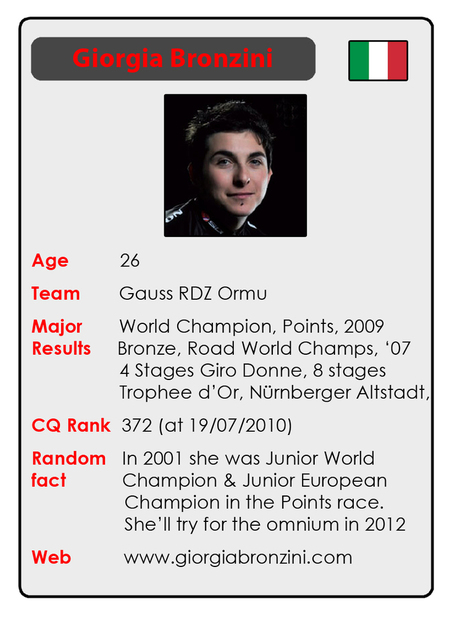 The other country that has a lot of sprinters is Italy - and  queen of the Italian sprinters isGiorgia Bronzini.  Giorgia is one of the many riders who races year-round- with her it's also the track, and she's even more successful there than on the road.  It's difficult for the riders who ride track and road, because the UCI, in their infinite wisdom, have a nasty habit of scheduling the Track World Championships opposite the first rounds of the Road World Cup.  Still, Giorgia has one of the best points/races ridden World Cup ratios this year, picking up 62 points (with a 3rd and a 5th place) in only 2 races.

Her specialist event on the track is the Points race - she was World Champ last year, but this year was caught up in a crash in the Scratch, and so despite leading the UCI rankings, she only finished 6.  I've read that she's one of the riders targetting the omnium for the 2012 Olympics, which will make for a very interesting competition.

She's also possibly the only rider with a facial piercing riding in the peloton or the track - but I'm willing to be proved wrong on that if you provide photographic evidence! 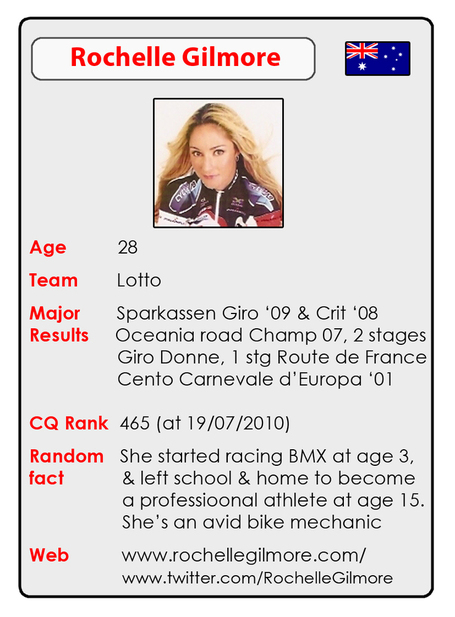 Rochelle Gilmore is another super-sprinter who's ridden both road and track.  She's been racing since she was 3 years old, and competed in gymnastics at a national level, before concentrating on cycling.  Although she used to ride track, these days she rides the road year-round, with 2 summer seasons, one in Europe, the other in Australia.

She's another of these super-tough Australians who think the best way to get through an injury is to ride through the pain (most recently in the Giro Donne, where she was on her bike for 2 stages after the huge stage 2 crash, despite being in so much pain she couldn't even brush her hair) - and in true Lotto style, blogs and tweets, which is fabulous for helping us follow the racing - and she runs her own cycling clothing company, which will soon be the place to buy the Lotto replica kit (and as of July '10, is looking for people to test the clothing - oooh, freebies, maybe!)

Her website says her hobbies are extreme sports, motorsports and she's passionate about the whole mechanical side of cycling, saying - "I bet my personal tool box and spares box is more complete than most women’s pro teams would have! " - hardcore all the way, and just as we like it!

Two more riders you'll see in the top 10 of sprint races all season - next up, scandal, Rainbow Curses and some seriously good bike racing with World Champions! 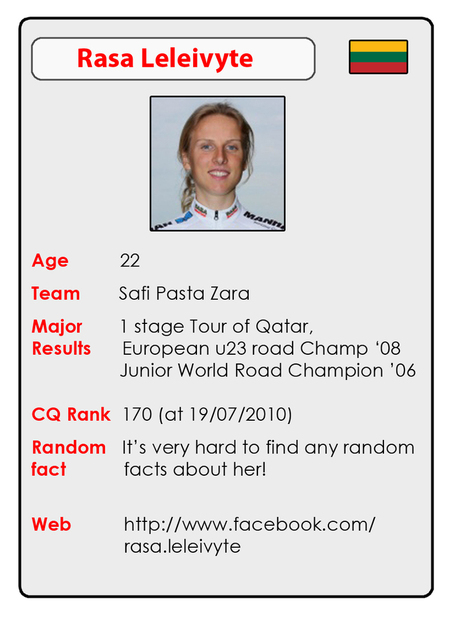 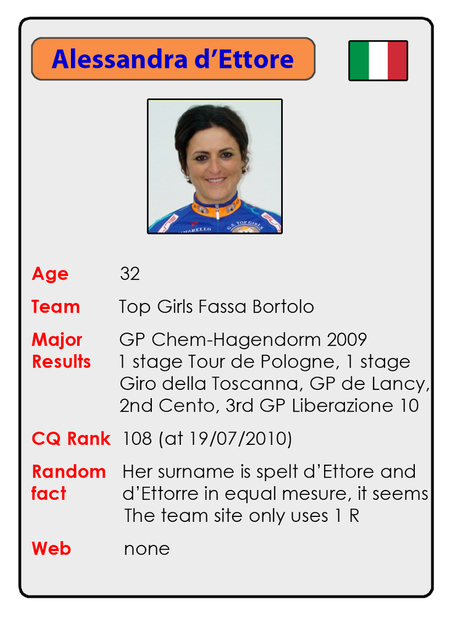