Share All sharing options for: San Sebastian Week! I Got Two Letters Today

[update] Chris here, sorry for the delay, but I think I caught all the typos in Ursula's post.

Hi folks. You are probably wondering where Txirla is. Well, I got two letters in the snail mail today. The first was postmarked clearly "San Sebastian". I was actually a file of all sorts of papers that were written by Txirla on cycling. They even go back to before bicycles were invented and had preliminary sketches of , "...A machine that humans might find amusing and so might distract them from destroying the planet." They are quite interesting. Also included are some papers of this years race to be held on Saturday and the bivalves handicapping of the race. I'll get to that handicapping tomorrow in another post. But first I need to talk about the other letter.

That letter: I couldn't quite make out the postmark. The first letter is a capital "S" though. The rest...I'm asking some cop buddies to try to identify it. That's the outside. The inside consisted of one photo. 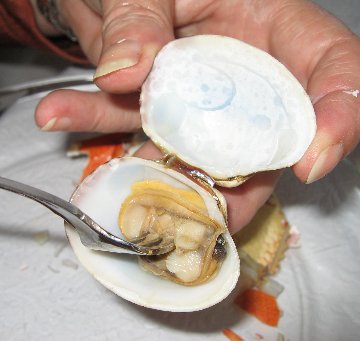 I sure wish I knew who's fingers those are...Who could do such a thing? What mascot hating monster? Does anyone here know of anyone living in some crap hole of a city a shining city on a hill that starts with an "S"? Some place that obviously envies tolerates Portland to the point of both homicidal mania and to not building light rail to anywhere but their airport preternatural patience and agreeing to be discussed in the same sentence with it? Where women who sit on a man's lap on a bus or train without a pillow between them face an automatic six month jail term lifetime of happiness together? Where you have to ask permission before setting fire to another person's property? Where all lollipops are sadness is banned? Or maybe some cruel ice-bound city filled 24/7 with "workers" on two month vacations?

I'll be back tomorrow with some of Txirla's posthumous predictions.