A Guide to understanding this race.

168 riders will take the start of San Seb on Saturday, but who do you pick for the win? Who might make the final selection? Ah; no easy answer there. Here's a few factoids that might help narrow the field:

- The winner will probably have raced the Tour. Seems obvious but there are a group of pretty good riders every year who skip the Tour for one reason or another and San Seb marks their second race back as they build their form most likely for the Vuelta. No rider who figures prominently uses San Seb as their first race back from vacation as the race is too hard for that. But the non-Tour races include Brixia, Wallonie, and a single day smaller Spanish race, the Ordizia.  There has ben a non-Tour rider who has won and placed in San Seb: Leo Bertagnolli in 07 won it, and Alexander Kolobnev in 08 placed 2nd, but these non-Tour guys are overwhelmed by the Tour riders in the final selection and the top step of the podium.

- The race this year, with it's two climbs of the Jaizkibel (the most scenic climb in all of cycling)  and Arkale, has been modified so that the two passes over these hills will determine the final selection even more so than in the past. Look at the profile again:

In the past, there were always a couple of tougher climbs early on that broke the peloton apart so that the Jaizkibel would see only about 40-60 riders still contending when it was reached. This year though, most of the peloton will reach the Jaizkibel the first time so the crowds there will see in the first pass the winnowing of the field and the second pass only a select few. With the weather projected to be in the low 70'sF/23C and partly cloudy, and its views of the San Seb harbor below, its hard to imagine a better spot to watch a race all year.

But what does this mean for the final selection? It will skew it more than ever towards climby guys.  Let's look more closely at the climbs:

First, the Jaizkibel, reached first after about 145 km, then the second time after 185 km: 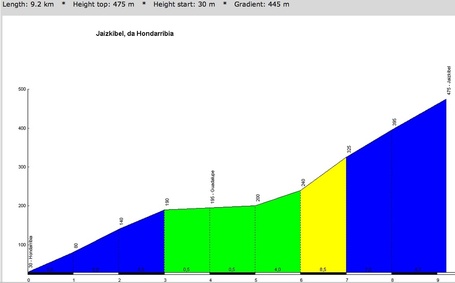 Those last three kilometers of 8, 7.4, and 6.7% will rip the legs off most of the riders, especially the second time after 190 km.

I can't find a profile of the Arkale. Its purpose is clear though: to confirm the selection made on the Jaizkibel. It is supposed to give those who broke away atop Jaizkibel, even by a few seconds, a chance to make it down to the finish without being caught. At least that's what I keep reading. Last year though proved that false as Barredo caught the leaders on the Arkale and-if you look closely at the race profile-that teeny little bump right before the end was what allowed Barredo and Kreuziger to escape (separately) the final foursome which also included Pozzato and Lulu.

So what am I trying to say here? Like all the major one-day Classics, this race is long (234 km this year) and hard. The climbs on it may seem like piffle compared to the Tourmalet, but they rip the legs of the riders as surely as any legendary Grand Tour climb and provide a subtle and really fast denouement, again like the climbs of LBL or Flanders.  With the climbs backloaded this year its quite possible that we might see a solo winner. Imagine Lulu TTing the finish alone...

So are we any clearer on who might win? No?  Okay:

- Its less likely that this year sees a sprinter type who can climb like Pozzato possibly win.

- We also know the winner and the main contenders will have just raced the Tour.

- Plus we know that most of the peloton will hit the Jaizkibel together but probably that climb will shatter the peloton so that dozens will probably give up the race completely right there and coast into San Sebastian. It happens every year: dozens and up to half of the field abandon the race at some point. I guess they are just too worn out by the Tour so that if they see they are dropping behind, they mutter "screw it," and give up.

-So can we zero in further on who might win out of the Tour guys? Difficult but possible. Its difficult because until 07 this race was not the first big race after the Tour. That honor went to Vattenfalls (HEW) Cyclassics and San Seb was two weeks after the Romp on the Champ.  So is there any pattern to the last three races that can help us?

By looking at the three years' results, one sees (and that might be obvious from the Jaizkibel profile above) that the final climbs more wear down the riders than produce a rigorous selection of the best climbers on the day. A guy like Barredo (last year's winner) can compete with J-Rod and Kolobnev with Menchov: everybody can climb but its more a question on who has the stamina on the day.

So look at the Tour top 70 and pick your rider. Make sure that since the climbs happen at the end that they can climb well. It helps if they have a kick at the end too. Oh and being a Spaniard is very helpful but not a crucial factor.