What is it? Sprinter Party!
Got Climbs? Not a one.
Yellow Jersey Battle: There are no time bonuses in this year's Tour, so the prologue winner will likely hold the Yellow Jersey today. The contenders for the overall, meanwhile, will try their best to stay out trouble.
Ideal Rider: Mark Cavendish. The brash, smack-talking British sprinter is made for stages like this one and will have the powerful HTC-Columbia train to deliver him to the finale.
@Gavia: Yo Mark, try to sprint straight this time!

This stage runs between Rotterdam and Brussels and could not be flatter if it tried. The stage will almost certainly end in a sprint, as the sprinters' teams are fresh and ready to chase down any impudent adventurers. Look for an early breakaway to escape in search of television time before the big legs from HTC-Columbia, Garmin-Slipstream, Cervélo TestTeam, Liquigas-Doimo, and Rabobank line up on the front to chase for their sprinters. Cavendish is the obvious favorite, but Tyler Farrar of Garmin-Slipstream has challenged him this season, and all the sprinters will have fresh legs on this opening day. 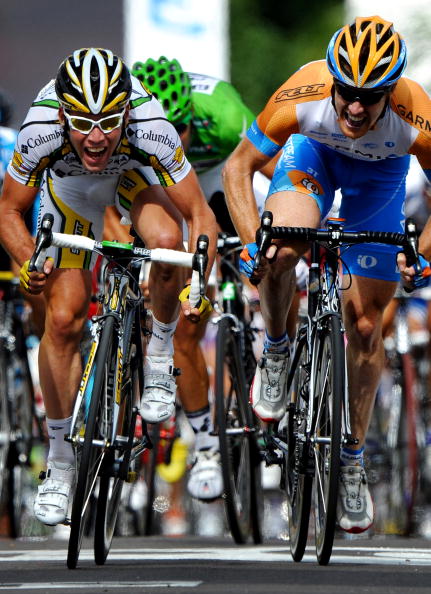 The Tour races along the coast of the North Sea, and crosswinds could blow up to interrupt the usual release and catch pattern of the sprint stages. Yellow Jersey contenders beware! The canny riders will sit near the front during this stage. If the wind blows, watch for a strong team to put the race in the gutter in the hope forcing a split. When it works, this move is a nice way to grab an early advantage in the general classification race.

Petacchi Wins Demolition Derby!
Total mayhem in the finale today with a string of crashes . Alessandro Petacchi came out on top. Cancellara was caught up in one of the crashes Read More

The Crash (with viddy!)