Well the schedule may say that this stage runs from Caerano San Marco to Biadene di Montebelluna, but everything the organisers have written emphasizes that this time trial runs from right outside the head office of sponsor Diadora to right outside the head office of sponsor Geox (main innovation: leather fits so much better if you start cutting holes in it – Isn’t that what the Spice Girls did?). And just to make sure that we don’t get distracted from their attempts to thank their sponsors, the actual course runs as far as possible away from anywhere remotely interesting. The men’s Giro sped through the midpoint at Cornuda in 2009, but that’s about it. Caerano di San Marco is quite pretty – it’s not been streetviewed, but if you drag the little orange man over the map lots of blue dots appear, each one a photo. Pretty, but there’s pretty and there’s Italian pretty. If anyone was hoping for twitter updates from Anton Vos during today’s stage then they may be disappointed because according to this little sign on the entrance, campervans, tents and caravans are never allowed in. Ever. Actually that probably locks out most of the teams too, because I don’t think that a single one of them has a team coach, Sky-style. Maybe some of the little ones can sneak in because they don’t even have a team campervan. 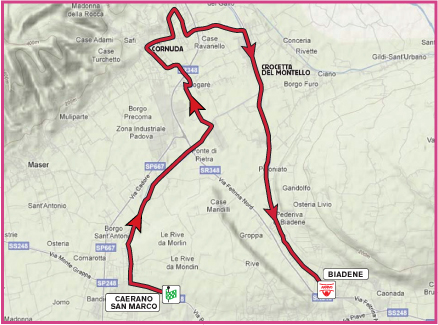 This course looks to be about as straightforward as a timetrial ever can be, with maybe just a couple of tight corners. The field is very strong with most of last year’s top ten returning. In fact the only absentees of any note are Nicole Cooke and Jeannie Longo, so if you want to seem very clever when the Worlds come round then make a quiet note of the top ten here and start casually dropping their names in to conversation for the next couple of months. At the end of the stage we’ll have a clearer idea of who’s in for the GC, and, despite Teutenberg’s suggestion that she ought to go for 4-0 to keep up with the German football team, the pink jersey will be on the back of a real contender. It will be interesting to see how fast the winner goes: stage 1 was raced at 45.4 kph, stage 2 at 39.3 kph.