This weekend the women's World Cup returns to Sweden and the small town of Vårgårda.  This is the penultimate race in this years series with only Plouay left in three weeks time. Besides the standard road race on Sunday Vårgårda also hosted a team timetrial on Friday . TTTs being more rare than on the men's side, this race could be said to be the women's equivalent of the unforgettable ProTour TTT in Eindhoven. Since there are only 2-3 TTT per year on the women's calendar  the teams naturally don't spend a whole lot of time practicing the discipline but there seems to be a lot of enthusiasm for the event among the riders (not so much this year perhaps due to bad weather) , perhaps just because it's such a rare event. Of course the race doesn't have a huge impact on the WC total, a win is worth 35 points which is the same as a third place in a regular WC race.

When it comes to uncertainty and excitement, this TTT might not be the place to look. Just like the last two years Cervélo and HTC took first and second and they are head and shoulders above the rest, both in terms of depth and material.  Behind them Nederland Bloeit grabbed third and thus made sure that Marianne Vos didn't lose any ground in the fight for the overall WC title.

After a rest on Saturday it's time for the weekends main event, the 132 km road race on Sunday. The course for the race is an 11 km lap that the riders will tackle 12 times. The main difficulty is the Hägrunga-hill which is just over 1 km long and one of those climbs that isn't spectacular in itself but saps the legs of the riders after repeated passages. The consensus though is that the course in itself isn't that selective, the team that hopes to win by avoiding  the sprint will have to pile on the pressure to make the race hard. Last year the race came down to a select group at the end but the big sprinters managed to hang on and in the end it was a two woman drag-race to the line between Kirsten Wild of Cervélo and Marianne Vos with Vos coming out on top. (Video) 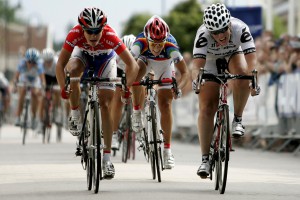 In the four editions of the race since it made it's premiere in 2006 , last years race was an anomaly though. The other editions have resulted in wins for small late breakaways so the big question might be if anyone has an interest in keeping it together? On a course like this Cervélo could surely see Wild as their best card and they have the power to sit on the race if the wish to. Nederland Bloeit also wouldn't mind to see that happen but Vos has shown that she is able to win the races in a multitude of ways and she certainly doesn't hesitate to cover the attacks of her nearest rivals. On the attacking side, HTC have riders coming out of the Thűringen Rundfart in good shape with Adrie Visser in particular looking very good. Also looking strong, winning a stage before succumbing to illness, was Swedish champion Emma Johansson and she will certainly be among those who try and break the race up to make sure the race is decided in a smaller group. She used her Red Sun team to do just that in her win at Het Nieuwsblad and if she could repeat that feat and get away without Vos glued to her wheel that would no doubt be popular with the home crowd. Both she and Lotto's Verbeke really need to win these last two races of the WC if they are to challenge Vos. Given the large lead that the current WC leader has, she only needs to avoid complete collapse in the two remaining races to secure the overall title though.

There will be some form of live video from the race at  vargarda.nu from 13:00 CEST on Sunday. Fixed cameras at the start/finish and on the Hägrunga-hill (and possibly some moto-shots).

If you  are wondering why a small town in Sweden ends up hosting a World Cup event, it's not as strange as it sounds. Vårgårda is in the heartland of swedish cycling and the local club was started by the legendary Pettersson- brothers. The four brothers won three World Championships, one Olympic bronze and one silver in Team Timetrials in the sixties. The best of the four, Gösta Pettersson went on to place 3:rd in his first Tour de France in 1970 and win the Giro  d'Italia in 1971 despite not turning pro until he was 30 years old.