If you thought that the race was flat up to now, then boy you ain’t seen nothing yet. The Po valley is famous for two things: its flatness and its legendary mists. As Mr Conte says, like mixing pastis and water. OK, maybe it’s hard to express flatness through a song, so maybe you’d prefer this video which flies over the first few km of today’s course in reverse. That does all the guided tour bit too, should you be interested. The course follows the Po from Ficarolo down to Canaro where it turns north and meanders slowly through the fields and villages to Lendinara, passing on the way the strangest memorial I have ever seen, the monument to the emigrant at Villamarzana. 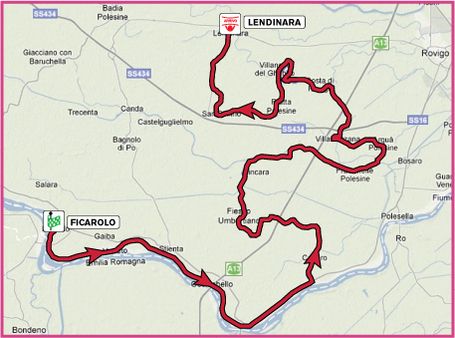 Stage one of the Giro finished in Lendinara back in 2008, on exactly the same finish line, and here’s the top five from then:

I thought I was joking yesterday talking about Ina-Yoko trying to match the German football team in going for 4, but you’d have to be an raving idiot to bet against her doing that now, and even only slightly possessed to think that she won’t get more than the four stages she won in 2008. If you can pick up RAI 3, they have scheduled 20 minutes of highlights for 17:40 CET Monday afternoon.