What is it? Cobbles! A tribute to Paris-Roubaix.
Got Climbs? Climbs, who needs 'em? We got cobbles.
Yellow Jersey Battle: Ask Iban Mayo. The last time the Tour raced over cobbles, Mayo suffered a crash and lost all hope of wearing Yellow in Paris. A dangerous day for the general classification riders.
Ideal Rider: Matti Breschel. Fast over the cobbles and a nice turn of speed for the finish.
@Gavia: Would it be mean to ask for rain? Yes, that would be mean. Rainy weather will turn this stage to chaos.

The Tour returns to France with this stage that runs from Wanze near Huy in Belgium to the Arenberg just outside Valenciennes, France. The stage celebrates Paris-Roubaix, one of cycling's great monuments. Four major sectors of cobbles (and several shorter bits) add up to a total of 13.2 kilometers on the pavé. All of the cobbles come in the final 30 kilometers of racing, which should make for a crazed finale to this stage.

The pavé won't do the light climbers any favors, and all the contenders for the general classification will fear the consequences of a mistimed crash or flat tire. The cobbles, they like to eat tires. Expect a desperate fight for position on the run-in to the pavé sectors, a fight that may prove more dangerous than the cobbles themselves. Indeed, this stage may again teach the lesson that not all 189 riders in the Tour de France can ride at the front at the same time. That's physics, boy and girls. This stage will reward the Yellow Jersey contenders with strong team-mates to keep them at the front and out of trouble. 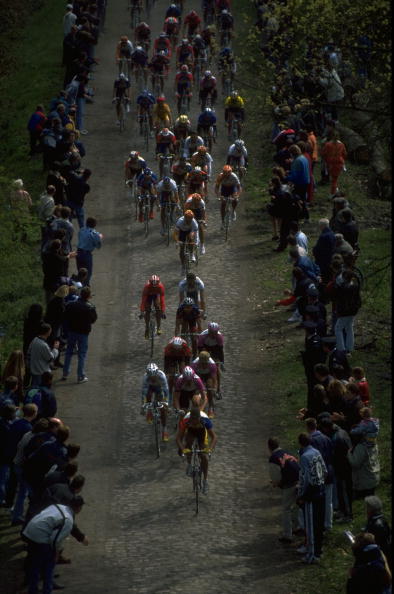 How will it end? That's anyone's guess. The final sector of cobbles comes with 10 kilometers to go to the finish. A rider in search of stage victory might choose to launch an attack right there. Classics riders like Matti Breschel, Fabian Cancellara, Juan Antonio Flecha, and Thor Hushovd are likely candidates for the podium kisses. It's also possible that the pavé does not break up the race, and it all comes down to a sprint finish. Crap-shoot. After previewing the course for this stage, Robbie McEwen predicted CARNAGE.

The roads of Northern France delivered the promised blow to the Tour de France, shattering the peloton into splinters and taking out one big name for good -- Saxo Bank's #2 Frank Schleck, who left without his collarbone intact. And Fabian Cancellara towed away the lead group, including Andy Schleck and Cadel Evans, as well as stage winner Thor Hushovd, now firmly ensconced in the green jersey.