I was looking for a way to celebrate Ina-Yoko Teutenberg’s equalling the performance of the German football team, yet also make it clear that we have reached a transitional stage in the Giro, and it came to me in one word. Schlager. So sit back and enjoy Peter and Conny taking life easy on the water as a prelude to today’s first hilly stage. But while they take the flat way across the lake, today’s course is much, much tougher.

First of all let’s get the touristy stuff out the way. Lake Orta was once known as Lake St Julius after a fourth century saint who built the church on the little island in the centre of the lake, but while the island is still known as San Giulio island, the lake began to be known as Lago d’Orta a few hundred years ago. And you know you’re moving up in the world here because you get a better class of miracle. At Lendinara they celebrate a wooden statue that supposedly bled. In Orta they say phfooey to bleeding statues which are ten a penny. Get this instead:

The origins of Isola San Giulio and its basilica are wreathed in tales of magic. Legend says that for centuries it was the home of dragons - including the evil wyvern, a winged, two-legged beast with a terrifying barbed tail. When St Julius, the island's namesake and founder of its basilica, arrived at Lake Orta over 1,600 years ago, no boatman was willing to take him across. Instead, with saintly ingenuity, he spread his cloak over the water in front of him like a raft and sailed to the island using his staff as a rudder - while simultaneously dispatching dragons with his sword.

And you felt pretty pleased with yourself being able to rub your stomach and pat your head at the same time. The video below is the best I’ve found that shows up the hills around the lake. The snow then gives a good contrast, but all reports so far talk of temperatures in excess of 40 degrees.

Wave byebye to Ina-Yoko Teutenberg for the moment, because she’ll probably spend today at the back of the bus smoking with the rest of the cool kids while all the swots step in to action. The official maps aren’t completely helpful as regards the profiles of the climbs, so I’ve plotted out what I think the route is over at bikemap, and I’ve come up with some surprising figures. Each lap of the lake involves some 500m of climbing. That’s 1500m worth of ascent for a stage described as transitional. And the final climb up to Ameno towards the end of each circuit rises 100m in the last km, which by my maths works out at 10%. Ok it’s a bit tricky to read that accurately, and I think I’m taking the worst case figures, but it looks as if the GC could be shaken up a lot here, especially as there is so little road to catch any escapees before the stage ends (see here for the final climb to the finish line which looks to be a consistent 6% all the way – it’s on a separate map because I’m a bit rubbish at using bikemap and I think that the line is at the top of the hill and not on the descent where I’ve placed it). So when Cervelo say "It will [not] be as flat as today's stage but also not that mountainous" they could be in for a surprise.

I don’t think there’s enough climb for the real mountain goats to start showing off, but instead we may see the one day classics stars coming out to play, such as Marianne Vos (it feels odd to have got this far without tipping her), Noemi Cantele, Martine Bras or perhaps even names like Vicki Whitelaw or Olga Zabelinskaya.

Here are the official maps. 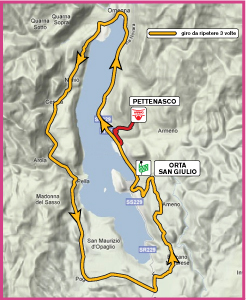 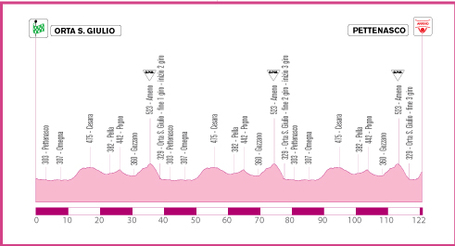