Share All sharing options for: Big Names Emerge from Hell

The roads of Northern France delivered the promised blow to the Tour de France, shattering the peloton into splinters and taking out one big name for good -- Saxo Bank's #2 Frank Schleck, who left without his collarbone intact. And Fabian Cancellara towed away the lead group, including Andy Schleck and Cadel Evans, as well as stage winner Thor Hushovd, now firmly ensconced in the green jersey. Alberto Contador was looking solid in the second chase group until a late flat cost him a handful of extra seconds, in an odd scene where his teammate Alexandr Vinokourov seemed to drop him in the last kilometer. Contador's time losses won't mean much in a couple weeks. 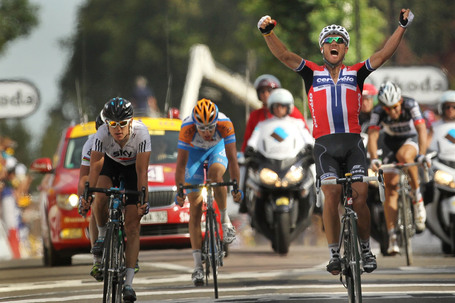 And a well-earned return to the yellow jersey by Cancellara:

Lance was about a minute behind Contador, thanks to a flat tire that cost him his position in the first chase group. This was a day they'd hinted at making hay, but fate is selective in these parts and Lance wound up on the receiving end instead. Welcome to the cobbles, big guy. 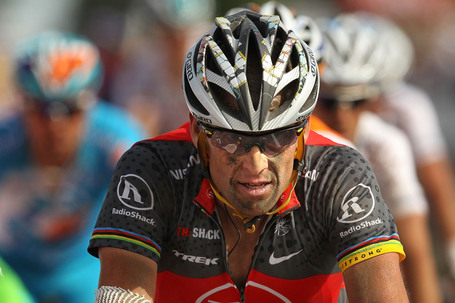