After yesterday’s tough stage the race eases off a bit. We move a few km soutwest to the Varese area, but the organisers have picked out a route from Gallarate to Arcisate that largely sticks to the valley floors and avoids any serious climbs. The race begins with two laps round the town of Gallarate, recently in the news when Italy and AC Milan midfielder Gennaro Gattuso fulfilled a childhood ambition by, erm, opening a fish and chip shop. Let’s hope that the ambition of some of the girls out riding today is made of stronger stuff. From there they race almost directly northwards to Lake Varese and to the town of Capolago at the head of the lake (Ambition, Imagination, what’s the difference. You can see that we’ve left the land of walking on water and battling dragons far behind), then follow the lake shore almost up to Cittiglio, home of the Trofeo Alfredo Binda, before turning northeastwards and continuing along valley bottoms and very low passes to Lake Lugano. From there they follow the shore back towards the south east and Porto Ceresio, then along the main road to Arcisate.

This area should be familiar to a lot of the riders. It’s been publicised as a trip to the home of Noemi Cantele, but a lot more of them live or have trained extensively in the area. Here’s the map and profile of what looks like the last easy day for some time. 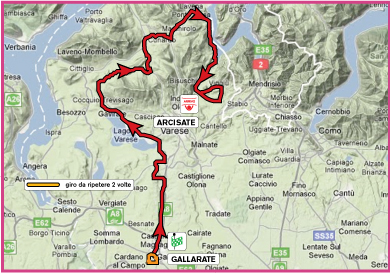 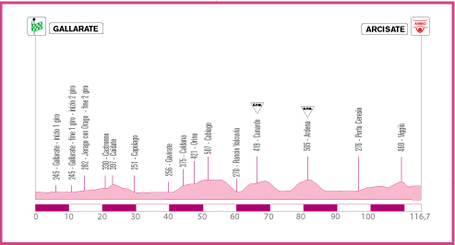 Looking back at the first five days we now have a clearer idea of who is riding for who. Tatiana Guderzo said after yesterday’s stage that this race is her main objective of the year, and she also seems to have found a useful worker in the mountains in Evgeniya Vysotskaya. It looks like HTC-Columbia are riding for Arndt and Cervelo for Hausler, but it would have been nice to have had a few more minutes of TV coverage so we knew why and where Stevens and Pooley dropped off (in the case of the latter was it on the descent just before that final uphill), and what happened to Cantele and Ryan. Amber Neben seems to be riding OK, but she doesn’t look like a serious alternative to Mara Abbott for the US to back. And Now we understand why two teams were fighting to sign Olga Zabelinskaya.