What is it? Sprint with a slight chance of breakaway.
Got Climbs? Only two, and they're quite small.
Yellow Jersey Battle: Most likely not.
Ideal Rider: Pick your favorite sprinter. I'll take Oscar Freire, just to keep it interesting.
@Gavia: While France is a beautiful country, some parts are very very flat.

The Tour continues its trip south with this flat stage running between Épernay and Montargis. At least the riders can't complain about transfers. Épernay is a stone's throw from Riems, where the previous stage finished. Épernay has hosted a stage finish on three previous occasions. The first time came in 1963 and Eddy Pauwels celebrated the stage victory and took over the race lead. Two small climbs come early in the stage, and should serve to send the early escape on its merry way. If one of the bigs in the general classification starts the day in Yellow, perhaps thanks to an opportunistic move on the cobbles or in the Ardennes, the break could survive. This stage offers a nice spot to hand off the Yellow Jersey and save the team for later days. More likely, it's a day for the sprinters, who will be thinking not only of stage victory but also of the Green Jersey. Paging HTC-Columbia, phone's ringing, dude. 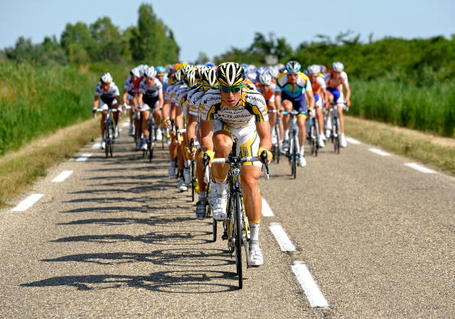 Better Late Than Never, Cavendish Wins
HTC-Columbia's Mark Renshaw gave one of the best sprint leadouts you'll ever see today, and his teammate Mark Cavendish finally got his unbeateable act together for the sprint victory in Montargis. With several teams vying for control Team Garmin-Transitions put its leadout train on the front for the final 2km, setting up Tyler Farrar to see if he could sprint effectively only three days after cracking his wrist in a crash (answer: not quite yet). Read more...

Know Your Tour! How To Win a Sprint?