Share All sharing options for: Tour Calms Down; Petacchi Sprints to Glory 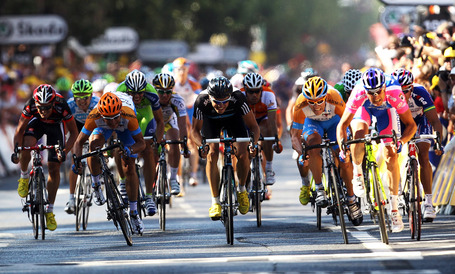 Ale-Jet has taken flight once more. Alessandro Petacchi, Lampre's veteran sprinter, showed the field that he has plenty left in his long, powerful legs as he stomped into high gear from 300 meters out and nobody could catch him. This was vintage Ale-Jet, forcing the high speed from early in the final sprint and daring anyone to try to come past. Among those who couldn't were Mark Cavendish, who gave up with 50 meters left; Thor Hushovd, who was glued to Cavendish and had nowhere to go; Edvald Boasson Hagen and Robbie McEwen, who gave it a go at least; and a duet of Garmin sprinters, Hunter and Dean, stepping into the void left by Tyler Farrar's wrist fracture.

Petacchi's win signifies the restoration of order to the Tour de France after several extremely hectic days. There were no crashes of note today, and no tricks on the course save for a succession of traffic circles as the peloton approached Reims. It was an easy day, relatively, and there should be a few more smiles around the dinner table this evening. Except at the HTC camp, where they've seen their Tour plans crumble. Today they put their leadout train on the front in the final 5km, but not for long as Lampre's Danilo Hondo sprinted up alongside them inside of 3km and signaled the end of HTC control of the race. From there it was an uncontrolled run-in to Petacchi's eventual victory. Results: