Now never let it be said that the bunch of PhD’s medics, lawyers and the like that make up the women’s peloton are shallow, but among those that have been out to preview stage 7, there has been a clear theme. Did you see George? OK they probably weren’t thinking of Lancashire’s finest, but this George, George Clooney. OK, and not in the Batman costume either. Fair enough, I suppose. Today marks the start of want for most of the peloton will be three days in hell, so why not think happy thoughts to try and get through.

Today’s stage is set in the Triangolo Lariano, a triangle shaped area sitting below Lake Como that is very popular for summer bike tours as shown by the large number of videos that can be found on You Tube, although you may spot that most participants are on mountain bikes. The day starts with a pleasant flat 15km stretch from Como alogside the lake to Nesso, before turning inland and becoming rather nastier. First there is a long slow climb, rising 500 metres over 10km for an average of 5% towards the town of Sormano. But about a kilometre and a half before Sormano the course leaves the "main" road and heads up the legendary Muro di Sormano, 2 km at a minimum of 5%, an average of 17% and a maximum of 25%. And if you had somehow managed to blank that thought from your mind then don’t worry, the locals have painted it on the road itself alongside the record times recorded for the ascent, although possibly not Ercole Baldini’s description of it as being "semplicemente bestiale"

From there things quieten down a bit as the course returns to water-level for the next 40km or so, before it heads inland once more towards Asso where the descent from the Sormano ended, but this time passing over the legendary cycling shrine of the Madonna del Ghisallo, then on to the finish line at Albese con Cassano, hometown of Fabio Casartelli.

It’s a really nasty day, but it could be that the Sormano is just too far from the end to make a difference. But I wouldn’t be surprised if Emma Pooley and Mara Abbott made a break on the ascent to Ghisallo, if for no other reason than to give themselves some leeway on the long descent. Here’s the route on bikemap if you want to play with it a bit.

And here is the official map and profile. 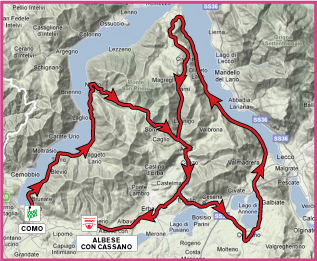 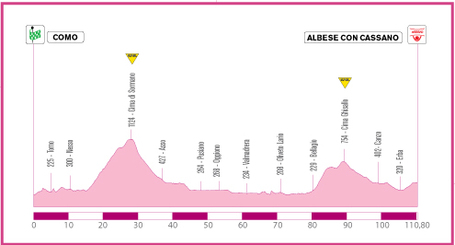 The Giro organisers categorise the stages according to difficulty and set the cut off time accordingly. Here are their definitions:

The last two stages which have caused so much trouble are just the midpoint, and today is not the hardest day. What’s 25% between friends anyway.