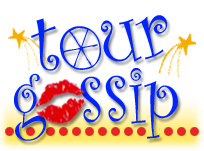 There’s real time, then there’s Tour time. In real time, yesterday just happened. You might even remember what you had for lunch, where you went on your bike ride, and what color shirt you wore. In Tour time, each day grows in length, so that three days may as well be three years. It’s like dog years, only with bicycles.

Already the prologue seems so very far away in this Tour de France. I think it had a bridge in it. And some rain. People crashed. Someone won. Someone got to cuddle the cute yellow lion on the podium and canoodle with the podium girls.

Random Question: Can anyone tell me why the podium girls are wearing black jumpsuits? Not hot.

So we’re deep in the flat farmlands of France now. It looks like Bakersfield, if Bakersfield had cathedrals. Lake Havasu has a London Bridge, so why not a cathedral in Bakersfield? Maybe that’s what the Tour of California needs to become the next grand tour. Cathedrals.

Did anyone expect Wednesday’s stage not to end in a sprint? No, no I really didn’t think so. It was just so very flat. The five rider break looked very stylish there off the front, but it’s was all doomed anyway. I’m not sure why RadioShack chose to parade about on the front of the field. Perhaps they wanted to make sure that everyone paying for advertising on Versus knew that Lance Armstrong’s RadioShack team is in the race. Or, perhaps someone cut a little dealio back in the cars, a few legs now in exchange for a little help later. One never entirely tell about those people in the cars. They get up to stuff back there.

Mark Cavendish, meanwhile, couldn’t get up to much in the final kilometer. Delivered close to the finish, his sprint never materialized. Legs like wet noodles, he just sorta stopped. I’m not going to play if I can’t win. I didn’t see him stick out his tongue, but he did throw his helmet out the door of the team bus. Really, I hope it was a short transfer today, for everyone’s sake.

Alessandro Petacchi pulled out one of his trademark long sprints. He jumped early, and held it all the way to the line. Lampre had some nifty tactics there, with Danilo Hondo jumping early and disrupting the clean line of the HTC-Columbia lead-out. The lead-out train didn’t have quite as much speed as it has at times, which made Hondo’s move work a charm. Behind Petacchi, Robbie McEwen showed a hint of form, though Julian Dean overtook him. 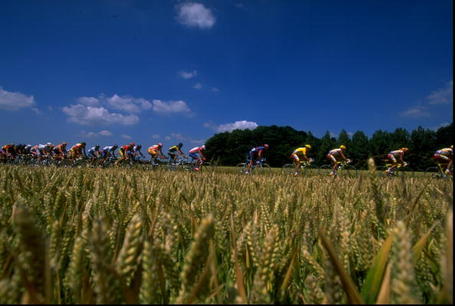 Dean typically leads out Tyler Farrar, but with Farrar riding through a broken wrist, Garmin-Transitions changed up their sprint order in hope of grabbing a stage win with Dean. Close, but not quite.

In an amusing side note, Jonathan Vaughters heckled Juliet Macur of the New York Times for failing to use the team’s full name on Twitter. Too bad Garmin-Transitions takes up nearly the entire 140 character limit, but at least it’s not Androni whatsit. Small favors, anyway.

Can I remember anything that happened before Wednesday’s stage? Maybe, if I try really really hard. I think there was maybe something about cobbles. Yesss, it’s all coming back to me now. I still think it needed rain.

All the same, it turns out that small climbers can ride cobbles, as long as they practice. Alberto Contador had Peter Van Petegem help him learn what to do with the stones, and his efforts paid off. Though the Spanish climber was caught behind a crash, he managed to limit his deficit and finish with the second group on the road. And Cadel Evans, so stealthy this World Champion. He rode the cobbles just fine thank you very much, and finished third on the stage. Evans grabbed the Cancellara train and stayed on. It’s too bad the finish didn’t include a bit of uphill, or Evans could have matched his Giro win at Montalcino, still one of the best days of stage racing in recent seasons.

If Andy Schleck wins this Tour de France, he’d probably better pay out Fabian Cancellara an extra share of prize money. First, Cancellara convinced the other teams not to ride after Schleck, and several others among the bigs, crashed on the tricky Ardennes roads on Monday. Both Cervélo TestTeam and Rabobank chafed under the pressure from Cancellara, but didn’t have the legs to challenge it. At the Giro, in the long stage to l’Aquila, the split that left the bigs behind held, because three teams had reason and ability to ride and ride hard. This time, more teams had reason not to ride, and Cancellara had an easy time asserting control.

Then, over the cobbles, Cancellara drove a split that put Andy Schleck a minute ahead of pre-race favorite Alberto Contador. Schleck may be very glad of that minute come the mountains, especially after his brother and climbing body double Fränk Schleck crashed on the cobbles. Yes, there is a reason "to Schleck" has become a verb, as the poor dude has a desperately bad relationship with gravity. Despite Fränk’s bad luck, Cancellara’s efforts have put Andy Schleck in a very nice tactical position in relation to Contador, and an even better one in relation to Lance Armstrong, who dropped precious time to Schleck, Evans, and Contador.

It could not have been the day Armstrong wanted, and he admitted as much after the stage. When the Tour last rode the cobbles, Armstrong’s team dictated affairs, much as Cancellara and Jens Voigt did in this year’s edition. Armstrong eliminated one of his most feared rivals that year, Iban Mayo, then one of the most explosive climbers in the sport.* Too bad about that EPO positive later. Anywho, this time around, RadioShack played defense. A badly timed flat left Armstrong behind it, and he made the best of a bad situation. He made his way back to a big group which included riders like Ivan Basso and Carlos Sastre, but Contador, Andy Schleck, and Cadel Evans remained up the road and out of reach. Certainly, Armstrong could not have wanted to enter the mountains with a time deficit to climbers like Contador and Andy Schleck.

I’m trying to ignore how well Ryder Hesjedal of Garmin-Transitions rode this stage. But it’s kinda hard and stuff. I so wanted him to stay away, but failing that, Hesjedal is sitting in a quite high spot in the general classification. We saw last year in the Vuelta a España that the boy can climb. He won a mountain stage in Spain, after all. But let’s not jinx him, shall we?

Once the Cancellara group caught Hesjedal, the outcome lost some of its suspensyness. Thor Hushovd won the cobblapallooza after sitting on the front group. It was all a bit of an anti-climax after the wild racing over the pavé. But it’s hard to fault Hushovd for sitting on. He’d have been a bit of a chump to help pull Andy Schleck and Cadel Evans further up the road from Carlos Sastre. Sastre may not have hopes of wearing Yellow in Paris, but certainly, he will want the highest overall finish he can muster. No reason for Hushovd to make the former Tour winner’s task any more difficult. Respect among team-mates is never a wasted effort.

Tomorrow, it’s more Bakersfield, as the Tour travels deeper into southern France. The stage should end in a sprint tomorrow, and hopefully, we’ll see no more throwing of toys. Yes, I’m looking at you, Mark Cavendish. Me, I’m just sitting here watching it all go by, as each day’s stage recedes ever more rapidly in the rear view mirror.