What is it? Longest stage of the Tour. Mostly flat with occasional climby bits.
Got Climbs? A few, but nothing to lose sleep over.
Yellow Jersey Battle: The jersey may change hands on this long stage and give a lucky breakaway specialist a day or two in the spotlight. By the time the race reaches Paris, though, it will all be a fond memory.
Ideal Rider: Pierrick Fédrigo. Fédrigo is a handy rider in the breakaways, and could take a stage victory, if the sprinters find the day too long for chasing. Otherwise, pick your favorite sprinter.
@Gavia: Are we there yet? Mountains. Give. Me. Mountains.

Below the fold, more stage details and Podium Cafe features.

The Tour continues its southward journey with this stage running between Montargis and Gueugnon. The race runs parallel to the trace of the Loire river and it's a mostly flat ride. There are several short climbs along the way, but nothing overly difficult. This stage is the longest of the Tour. Though the terrain will suit the sprinters, the length may dissuade their teams from committing fully to the chase. The general classification teams are unlikely to take an interest, especially with an uphill finish on the menu for the following day. It'll be all on the sprinters to keep this one under control. The weather plays the wildcard. If it turns hot, this stage will become a long slog to the finish. Sprint or break? Watch and see! 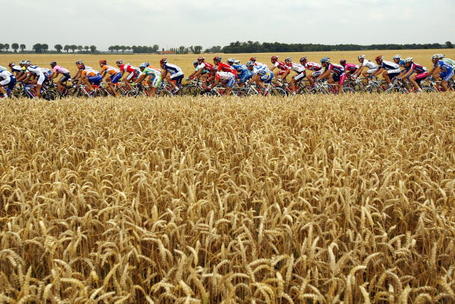 The one-two punch of Renshaw and Cavendish emerged from a disorganized sprint to take the Manxman's second consecutive stage win, a bike length ahead of American Tyler Farrar. Cavendish's win, his twelfth career Tour stage victory, moved him to within shouting distance (33 points) of green, while several others took advantage of Thor Hushovd's poor 10th place today.

Checking in with the Kids, White Jersey Update

Rise of the Pilot Fish

Know Your Tour: Why are we here?

Contador Likely to Stay at Astana