Know Your Tour! Stage 6: Why Are We Here?

Share All sharing options for: Know Your Tour! Stage 6: Why Are We Here? 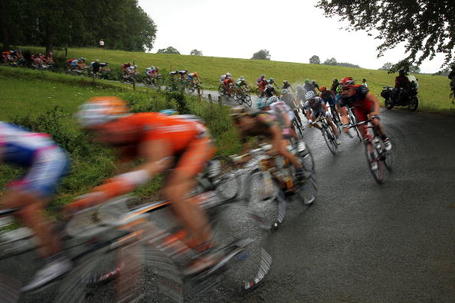 Today's Know Your Tour! segment examines why so many riders, from the penthouse of Contadors and Armstrongs all the way down to the bottom floor of neo-Footons, all talk of basing their season around the Tour de France. This will be relatively short, since some of the answers are pretty obvious. But I can think of at least one that isn't.

The Tour has long been the cycling world's biggest stage. Back in the days of Coppi and Bartali, even the Italian champions knew that they had to test themselves in France to achieve ultimate respect. This is as true as ever. It's the most-watched race. The hardest, longest race. The fastest-paced stage race. The wealthiest event, therefore the most lucrative race for the riders. The sponsors of almost every top team care more about showing their labels in France in July than anywhere else. It's priority #1, for everyone involved in this level of pro Cycling.

One more reason to ride the Tour is that it's the world's best training, particularly for younger riders. It's tempting to measure guys by the sum of their parts: Joe Blow can sprint, he can climb, he can time trial, etc. And from there, surmise that a guy who can climb and time trial can be competitive in the Tour. Another version is where you see a guy who can climb and sprint, so you might assume he can win Liege-Bastogne-Liege or the Giro di Lombardia (two of the five classic Monuments of Cycling).

Less obvious but no less important than these skills is a certain hardness to a cyclist's body, a basic level of strength, that you don't often see in even the top young riders. It's this hardness that qualifies a rider to compete for the Cycling world's biggest prizes, which happen to be the world's hardest events -- the three grand tours, the five monuments, and (sometimes) the World Championships. It's the ability to keep those race-winning skills -- climbing, sprinting, etc. -- sharp after two weeks of hard days or 220km on the fly. In almost every case, it's a hardness that is earned slowly, not overnight.

And there is no better place to build that strength than the Tour de France. We all know it's the longest cumulative event and has the hardest climbs, but a lesser known way in which the Tour distinguishes itself even from the other grand tours -- the Giro d'Italia and Vuelta a Espana -- is the speed of the stages. In the Giro and Vuelta, riders often quip about soft-pedaling for the first couple hours of the stage until they see the TV helicopters approaching, usually around halfway. In the Tour, there is no easy stretch. It's either all-out or something pretty close to it from the time the first flag drops. Nearly every precious km of the Tour de France is raced, in a way that's rarely true elsewhere. It follows that the Tour does more to test the riders and build strength for the coming seasons.

One example I'll offer is one of my favorite young riders, Lars Boom of Rabobank. Boom was the Under-23 World Time Trial Champion at age 21, Dutch road and time trial champion at age 22, and a world cyclocross champion at the Junior, U23 and Elite levels. He's still just 24 as he embarks on his first Tour de France. His skills are well suited to the classics of Flanders and maybe the Ardennes; the boy can climb and sprint, along with having a big motor in general. But Boom at his age is only a top competitor in races up to about 200km. This spring, he finished fifth among the biggest names in the E3 Prijs Vlaanderen, the key warmup race for the Tour of Flanders, and a race that just clicks past 200km. In Flanders a week later, on a 250km course, he finished 77th, 13 minutes back. Not because he blows up at 201km, it's also true that the team knows his limitations and deploys him accordingly. But the reality is that Boom needs to do the Tour de France to accelerate that building of strength that will catapult him up to the top levels of the sport. It's not the only way to get there, but as with so many other ways of looking at the Tour, it's the best.