Better Late Than Never: Cavendish Back In Command

Share All sharing options for: Better Late Than Never: Cavendish Back In Command 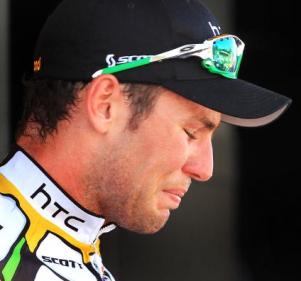 HTC-Columbia's Mark Renshaw gave one of the best sprint leadouts you'll ever see today, and his teammate Mark Cavendish finally got his unbeateable act together for the sprint victory in Montargis. With several teams vying for control Team Garmin-Transitions put its leadout train on the front for the final 2km, setting up Tyler Farrar to see if he could sprint effectively only three days after cracking his wrist in a crash (answer: not quite yet). But it was Renshaw who crashed the party, first boxing in Thor Hushovd, then accelerating through an opening past the Garmin train and dropping Cavendish off in perfect position to finish off the field. Gerald Ciolek of Milram was second-best on the day, with a hard-charging Edvald Boasson Hagen of Team Sky in third for the second consecutive stage.

No change in the overall results. I'll have a post later analyzing the Green Jersey race.