What is it? A "middle mountain" stage. Translation: It goes up and down a lot.
Got Climbs? Yes! It's one climb after another on this stage, and there's an uphill finish.
Yellow Jersey Battle: The final climb won't open up huge time gaps, but it does offer a sneak peak at who has brought his climbing legs to his year's Tour de France.
Ideal Rider: Cadel Evans. The World Champion rides well in climbs like these, and has a nice turn of speed for the finish.
@Gavia: Mountains! If the bigs play stare down, I will personally fly to France and wack them about the head and shoulders with a wet noodle.

The Tour heads into the Jura mountains with this stage running from Tournus to the Station des Rousses ski resort. The Jura run from Alsace to the Alps along France's eastern borders with Germany and Switzerland. Jura derives from a latinized version of the Celtic word for forest. The Jura mountains, they have lots of trees. Geology alert! The Jura mountains also lend their name to the Jurassic period in Geological time. The Jura are relatively young mountains and continue to grow in altitude as they are pressed from the south by the Alps. The highest peak summits at 1720 meters or around 5600 feet, which makes the Jura relatively low as mountains go.

The stage starts out innocently enough with 40 kilometers of mostly flat racing. These early kilometers will likely be fast and ugly, as riders constantly attack in search of the right breakaway. We can expect a mountains classification contender to be among the escapists. This stage has six categorized climbs offering a bounty of points. The pace behind the break will likely be high as the bigs begin to think seriously about chasing the Yellow Jersey. The climbing begins around kilometer 44, and it's all up and down to the finish. I'm not sure there's a flat centimeter of road anywhere on the course.

Tactically, this stage offers some intriguing possibilities for the Yellow Jersey race, though the finishing climb isn't all that. The stage finish at Station des Rousses sits at 1168 meters, and the Tour de France course has included this climb in the race on more than 40 occasions since 1911. Carrying a category 2 rating, the final climb runs 14 kilometers to the finish at an average gradient of 5%. (View video of the final climb.) It's not one of the ridiculous climbs, but raced hard, it should hurt a few legs. Expect to see a group of 20 or so riders reach the finish here. Most riders will still have legs fresh enough to stay on the wheels, and the gradient isn't quite difficult enough to blow the race apart. And with the more difficult climb to Morzine on the menu for stage 8, the bigs may choose to play the waiting game. Here's hoping for some hard racing, because really, there's no time like the present. 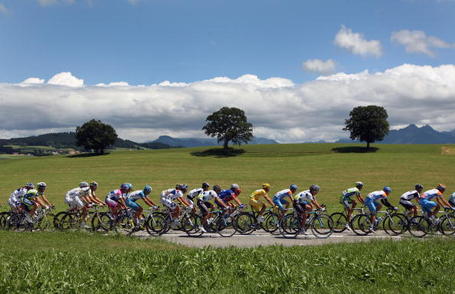 Sylvain Chavanel attacked out of a somewhat placid group of climbing royalty to seize the last stage before the Alps, and the yellow jersey to boot. Chavanel, a French classics stud riding for the Belgian Quick Step machine, has given the home fans something to really cheer about: his second stage and a second turn in the leader's jersey.

Will Looks at the Final Climbs. With Video!

Know Your Tour! What's so fun about breakaways?