Know Your Tour! Stage 7: What's So Fun About Breakaways?

Share All sharing options for: Know Your Tour! Stage 7: What's So Fun About Breakaways? 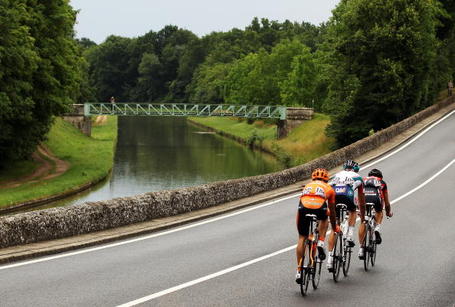 Today's entry in our daily Know Your Tour! series concerns an element of almost every race you see in the sport, save for the time trials. Breakaways make the first 200km of a 220km stage more interesting for everyone involved. But (or maybe because) they're an unbelievable amount of work... so why do they happen, and what goes on?

1. So You're Thinking of Breaking Away

Cyclists aren't stupid, they all know what the likelihood of success is for breakaways (1 in 10 maybe?), and yet they do them anyway. They join a bunch of guys who they may or may not really know to go on one of the hardest bike rides they'll ever do, putting pressure on the pedals for most of three or four or five hours at a pace sufficient to hold off a swarming horde behind them. They do this for a few reasons:

Breakaways have a certain character to them in the flat and transitional stages (if not quite the mountain stages where different strategic interests come into play). On the flat stages, breakaways are basically set free with the tacit approval of the peloton, as long as they don't contain anyone who poses a threat to a major classification. In other words, no top sprinters, no yellow jersey contenders. [Remember Lance Armstrong joining a break when he was mad at Filippo Simeoni? Lance wouldn't drop back unless Simeoni did too, meaning the field would have to chase them, so Simeoni was rather rudely disinvited to stay.] Mountain Jersey points seekers are allowed to take off, however, so if you have your eye on the coolest-looking jersey in Cycling, the peloton won't look after your interests. Get going.

In one-day races it gets a bit more complicated. Unlike the Tour where some teams can afford to skate by today and fight on tomorrow, in the classics there is no tomorrow. So when a break goes up the road, there are similar concerns that it not contain any of the favorites for the win that day, as well as concerns that the break contain the right mix of teams. No one team can be too dominant compared to the others involved, and if certain teams or too many teams miss out completely, the chase will be on. By contrast, in Tour stages the "teams mix" isn't usually very important.

In these cases, the strongest teams will keep an eye on the makeup of breakaways and decide whether they feel like they need to chase them down or not. When the breakaway looks "right" to the stronger teams, the teams with the strength to chase down a breakaway stand down. The riders on the loose are set free.

Once a break goes up the road, it's up to the riders to make it stick. Ideally this requires everyone to work, and work hard, usually in a "paceline" formation where riders are in a constant slow rotation taking very short pulls on the front. Proper pacelines are considered more efficient than taking longer pulls on the front, though as the day wears on the stronger riders wind up contributing more to the effort.

Sometimes you see riders doing very little work in a breakaway, and this brings us to the one true law of the break: if you don't work, you shouldn't win the stage. There are exceptions, like on stage 3 where Fabian Cancellara drove home the winning move while Thor Hushovd sprinted for the win after not taking too many pulls. Here Cancellara was pursuing his own agenda of helping Andy Schleck bank some time for the yellow jersey chase, so if Hushovd sat back and enjoyed the ride, he's allowed to do so and isn't guilty of anything more than maybe celebrating too much. But that's a special case. Most breaks consist of riders with no special agenda except for that stage win, so if you're not working to create the opportunity for the break to win, you had damn sure better not poach the victory when the opportunity arises. If you do, expect harsh words and long memories -- if you stick around long enough, someone will get back at you. Oh, and you won't be doing your future contract prospects any favors either. Nobody wants to hire on that baggage. Aside from that, break politics get a little murky.

One thing I never understood is why riders in a break will play games in the final KM. Occasionally you see them, almost at a standstill, looking at each other to see who will make the first move. Obviously basic tactics say you want the other guy to be in front from 1.5km to about 400 meters or so, but everyone knows that and the "you first," "no, you first," "no, I insist" games start. Sometimes they end up caught by the peloton as a result of these games, meaning the riders have chosen to lose completely over possibly taking second at the end of a break. This is one of those psychological reactions I will probably never understand since I can't experience the emotions of being in a break at the Tour. Suffice to say, the guys themselves insist that finishing second is too disappointing and nothing less than a win matters. I'll take their word for it.