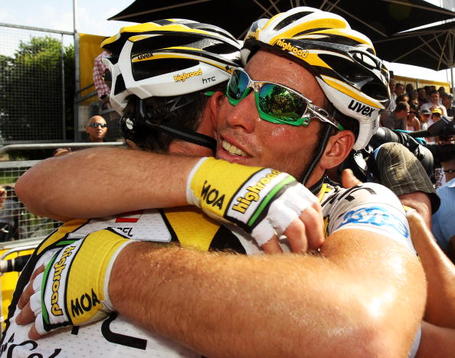 The one-two punch of Renshaw and Cavendish emerged from a disorganized sprint to take the Manxman's second consecutive stage win, a bike length ahead of American Tyler Farrar. Cavendish's win, his twelfth career Tour stage victory, moved him to within shouting distance (33 points) of green, while several others took advantage of Thor Hushovd's poor 10th place today. Alessandro Petacchi now stands just four points out of green, and Robbie McEwen another nine back. Farrar, meanwhile, is apparently regaining his ability to grip his bars, powering to a second-place ahead of a lot of guys who aren't sporting elbow fractures. He clearly brought excellent fitness to France this year, if not luck. Results:

No change elsewhere. And that is the last time I write that for a few days.