Let’s do it. ‘Cos others here have already claimed it’s business time. If you’ve been following the Giro so far, then the one thing you are probably thinking is are we there yet? Well now after some 740km, the pass that dare not speak its name is just a few kilometres down the road, 50 to be precise. And last night for the first time since leaving Muggia last weekend the riders were able to ride to their hotels from the finish line in Livigno. Livigno is actually a bit of an oddity in Italy. It is in such a remote spot in the mountains that there are only three roads that lead in and out, two of them go to Switzerland, and one is a tunnel that doesn’t let cyclists through. In other words there’s only one way for the race to go and that’s forwards over the Passo Foscagno to Bormio. In a sop thrown to the non-climbers, the stage opens with two circuits around Livigno first, as if someone thought that it was possible to get enough momentum on the flat to catapult you over the hills. Ha Ha. Carry on over for more detail on the route.

The first climbs of the day aren’t too bad. Here taken from salite.ch are the profiles of the two ascents en route to Bormio:

And here are the corresponding descents, which look far nastier (remember they will be travelling from right to left):

So if some crazy descender wanted to gain a bit of a cushion early in the day there may be the opportunity. Someone like Marianne Vos, say, who could reach Bormio with enough of a lead to force Tatiana Guderzo to leave the comfort of that group following behind the Abbott and Pooley show. Guderzo spoke after stage 7 of her surprise that the rest of the group she was with let Vos come back, and she is the one with the most to lose, as she only has a cushion of 33 seconds protecting her third place on the podium. Here’s today’s route on bikemap if you want to see where the crests occur on the map.

Of course all that is the appetiser for the Stelvio. It’s not as long as yesterday’s ascent of the Maloja pass, coming in just under 20km, but it’s a bit steeper, averaging 7%, and more crucially it’s at the business end of the race. Here’s what it looks like from the front seat of a car, via your computer monitor (note: this isn’t the side with the 50 hairpins, but the one with the dark, narrow, twisty tunnels – If only Tyler Farrar was here for us): 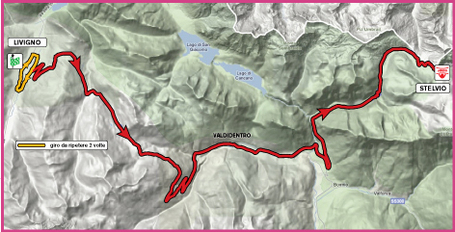 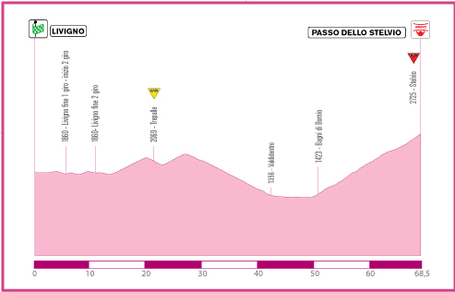