Share All sharing options for: Live Chat! Ina-Yoko Teutenberg Comes to the Cafe! 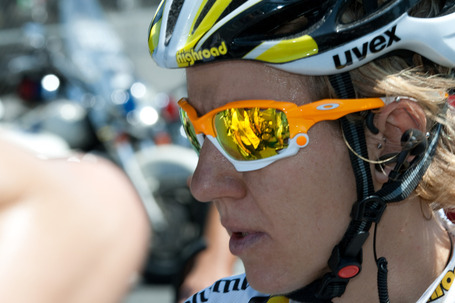 Ina-Yoko Teutenberg of HTC-Columbia will join us TODAY Tuesday, 17 August for a live chat. The chat begins at 11:00am PDT (2:00pm EDT, 8:00pm CEST) and you should be here! Because chatting is fun.

Who is Ina-Yoko Teutenberg? She's one of the winningest riders in women's cycling with 21 victories to her credit. That's 21 victories, this season. Mark Cavendish is the men's answer to Ina-Yoko T. Teutenberg's best at the bunch sprints and she can churn out a solid crono on her day. The German holds the current record for wins at the Liberty Classic in Philadelphia, the one day race held over the same course as the men's Philly race. She has four. At this year's Giro Donne, she won four straight stages. Not good enough for you? She won the 2009 Ronde van Vlaanderen. In short, she's pretty much a total badass. (See her career results.)

She is probably the most respected and the most feared member of the peloton. She is both tough and lovable at the same time. That's how Bob Stapleton, team owner of HTC-Columbia, described Teutenberg in an interview with Lyne Lamoureux at Podium Insight earlier this season. Teutenberg is "the emotional center of the team," according to Stapleton and plays a mentoring role for the team's younger riders. Read the full interview and see what Teutenberg had to say about the Worlds race and her powerful HTC-Columbia team. 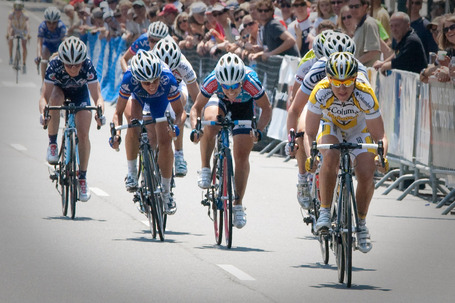 When I asked Lyne for an interview link, she also sent me a race story. The story comes from the San Dimas stage race, a traditional spring race here in the California. This year, the race came down to the final stage, a criterium. It was not a course that looked likely to overturn the overall standings, but Teutenberg had other ideas. First she formed the winning break, then she attacked to win solo. Despite a team chase from Peanut Butter Co TWENTY12, Teutenberg took enough time to win the general classification. (Lyne tells the story far better than I do.) That's badass bike racer stuff right there.

All this means that you should be here at the Cafe on Tuesday, 17 August at 11:00 am PDT for our live chat with Ina-Yoko Teutenberg. Want to study up beforehand? You can find her team bio over at HTC-Columbia. Or, stop by and say hello @yokoteute.

One last thing, if you aren't currently a member of Podium Cafe, you'll need to register to participate in the chat. Head over to our reg page. I promise it won't hurt a bit. See you Tuesday! 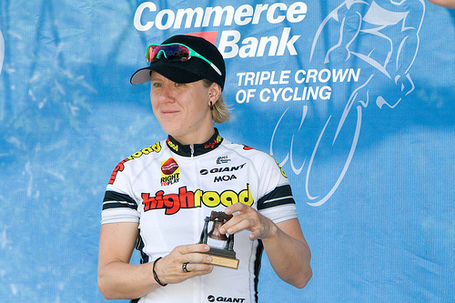