Share All sharing options for: Top Trumps 6: The only way is up!

I've covered a lot of the climbers already in the previous post in this ad hoc series of home-made Top Trumps cards but there's always room for more!

In general*, there are three main routes for women to get into pro-cycling. The first goes something like this:

"My big brothers/cousins/friends all were into cycling, so of course I wanted to do it too, and I badgered my parents into letting me - I won my first race at 5, and pretty soon was beating all the boys".

The second is something like "I used to do triathlons/run cross-country/do some extreme sport at uni, but it was destroying my knees, so I moved to cycling and found out I was pretty good at it".

(There are regional variations to these - for example, in the Netherlands you see a lot of "I was speed skating, and cycling for training, until someone pointed out I was better on the bike than on the ice" - and in the UK it can be a bit "British Cycling came to my school, and I tried out so I could get out of maths") 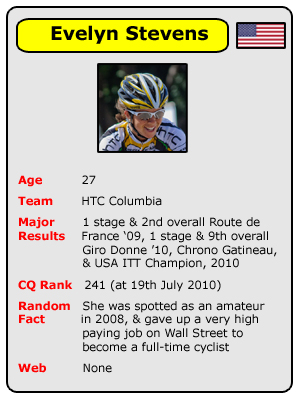 The third main route is my favourite.  It generally involves the future rider working in some full-time high-achieving job, when for some reason they decide to try cycling, usually for a laugh, and they realise they're pretty bloody good at it.  So good, in fact, that before they know it, they've given up their work, their lifestyle, and a regular living wage, to hit the road as a pro.  I mentioned a few riders like that in part 3 of this series - and my personal favourite Sharon Laws is another one of these - but Evelyn Stevens is one of the best examples of how to take this path.

In 2007 Evie was a very highly paid Wall Street executive when her sister persuaded her to get on a bike for the first time since she was a kid, and try a Cyclo-Cross race.  She was hooked, and for the next year generally astounded people with just how good you can get by cycling off the work stress in front of the tv.  Her story is fabulous - and it's told in excellent style here, so I won't repeat it - everyone should read that article at least once a year, as it really is inspirational.

She started racing seriously in 2008 - and was signed by HTC-Columbia for 2009.  Her first season was great, coming second overall in the Route de France (follow this year's race here) - and 2010 has been even better, with a win in the Chrono Gatineau, and a stage in the most prestigious women's stage race, the Giro Donne.  Who knows what she'll do next?  Jump below with me, and you'll see some of the riders Evie's climbing against.

(*Clearly this is a massive generalisation and I don't think there are really just 3 ways in... If you can think of other routes in, share away in the comments!) 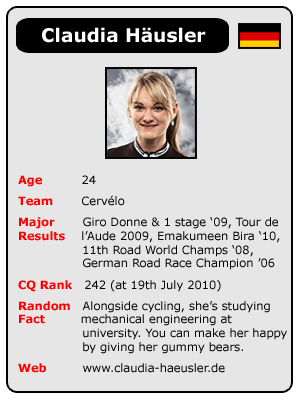 Claudia Häusler is this tiny, pixie-like rider who uses looking little and cute to hide a huge talent.  In any other team but Cervélo, she'd be the clear GC contender - but as we've discussed a lot this season, Cervélo's tactics can be a bit opaque at times, so who knows what their plan is? (Generally ATTAAAACK!!!!)

Claudia is a superb rider though - and still only 24.  She rides one of the most limited schedules in the peloton (in her spare time she's studying mechanical engineering, field development and construction at university, as cycling doesn't last forever) - and in addition to all that, she's an ambassador for Muskeln für Muskeln , a charity dedicated to fighting Spinal Muscular Atrophy.

When she was just 20, she took the German Road Race title (which is no mean feat in any year) - and the following year she was Queen of the Mountains in Tour de l'Aude, and Best Young Rider in the Giro del Trentino (both races where climbing is very important).  In 2008 she won a stage in the Giro Donne and ended up 3rd overall, which she topped in 2009, winning the whole race and a stage.  This year she's been focusing on her studies, apparently, but she still won the Emakumeen Bira (a race in the Basque Country that includes an uphill Time Trial) and came 4th in the two big stage races, the Giro Donne and the Tour de l'Aude.  If Cervélo ever sort out how to divide the races between Claudia and Emma Pooley, both of them could be unstoppable.... 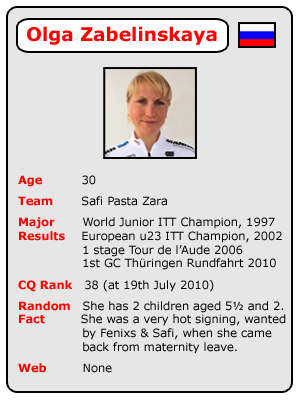 Olga Zabelinskaya is a former Junior World ITT Champion who looked like she was having a shocking return to pro-cycling when she was knocked over by a car in April.  It was especially bad luck, as she was just coming back from maternity leave, after having 2 children.  She had some pretty good background though - European u23 ITT Champion in 2002, winning  a stage of the Tour de l'Aude in 2006, after the birth of her first child, but still, that could have been it.

Luckily for fans of gutsy cycling it wasn't. Fenixs had wanted her for their team, but in what seems to have been the nearest equivalent in the women's race to a bidding war, she signed to Safi Pasta Zara, and after only 6 pro races this season, hit the Giro Donne, where she ended up in the top 20 of most of the stages, but really showed her talents when the roads went uphill  - coming 3rd on the lumpy, Classics-esque stage 6, and 9th on the epic Stelvio stage, ending the race 9th overall.

She followed that up by winning the first stage and the GC of Thüringen Rundfahrt - and most recently taking the prologue of the Route de France.  What next? Well, this race isn't over yet, but Russia are definitely looking like a strong power in women's cycling for the next few years - especially as every time Olga gives post-race quotes, it seems she's talking about how she wants to improve further - so thinking ahead to the Worlds, after teams like the Netherlands and Italy, and then Germany, they have to be one of the teams to watch.... 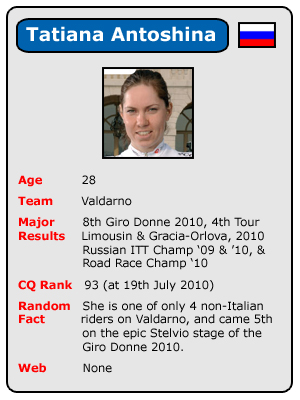 Tatiana Antoshina is another Russian to look out for, and another rider who shone on the Alpine stages of the Giro Donne.  Tatiana rides for Valdarno, a team that recklessly disregards the internet (although they do have a Facebook page) - so there's less to say about her than the other riders (although as ever, add anything you know about her to the comments below).

She won the double of Russian National Champion on the Road and ITT this year - and she ably supported her team-mate and World Champion Tatiana Guderzo through the Alpine stages of the Giro Donne, coming 5th on the Stelvio stage and 8th overall.  She's a great time trialler as well, coming 4th in the Worlds in 2008 and 7th in 2009.... definitely a rider to watch....