The Crooked Path To Victory, by Les Woodland

To say that to outsiders cycling's doping problem makes it look like a corrupt sport is stating the bleeding obvious. But just how crooked is cycling, doping aside? Les Woodland's The Crooked Path To Victory looks at the slightly less straight paths to victory - doping and beyond - and leaves it up to you to decide for yourself.

Share All sharing options for: The Crooked Path To Victory, by Les Woodland 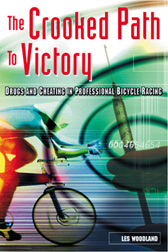 Title: The Crooked Path To Victory: Drugs And Cheating In Professional Bicycle Racing
Author: Les Woodland
Publisher: Cycle Publishing
Year: 2003
Pages: 192
Order: HERE
What it is: A compendium of cycling chicanery.
Strengths: It was the one book Dan Coyle recommended in his look at Lance Armstrong's 2004 season.
Weaknesses: It's a bit slight, with no central thesis or any attempt to explain why we can still love a sport that's apparently so crooked.

A compendium of cycling chicanery, Les Woodland's The Crooked Path To Victory is a collection of tales from the seedier side of cycling. Which description probably makes it sound far more depressing than it really is. And depressing is one thing the book ain't. Many of the tales told aren't even really crooked or cheating, they're just colour, tales of rogues and rascals, and maybe even the odd scallywag.

The first third or so of the book is a nice little overview of the highlights of the sport's early years, with stops for the sort of cheating and gamesmanship that went on in the earliest bike races, most of which seemed to involve strewing the road with tacks and broken glass. The middle third is a relatively light-hearted look at chicanery, dodgy deals and general mischief making from some of the characters of the sport's middle years. And the final third is doping of more recent vintage. That this third section is by far the weakest part of the book - which is odd given that it's the one section that really deals with proper cheating - is down to it being just another rehash of l'Affaire Festina, drawing heavily on the accounts published by Willy Voet and Bruno Roussel, with some extra colour added by a selection of stories from Erwann Menthéour's confessional.

The first two sections though are well worth picking the book up for. Of the early days, Woodland is strong on things like Choppy Warburton (the Michele Ferrari of his day), the birth of Six Day racing (particularly the unlikely role played by Islington's Agricultural Hall) and other highlights of the pre-Tour years. Take the tale of Charles Terront's ‘coup de la chambre d'air.'

In 1893 Terront was one of the biggest draws in French cycling. Pierre Giffard had made a hero out of him when he won the first Paris-Brest-Paris in 1891. Possibly he was cycling's first superstar. A canny promoter decided to pit him against Valentin Corre, who'd placed third in Bordeaux Paris, in a one thousand kilometre challenge, to be raced indoors on a track at the Galéries des Machines in Paris. Two and a half thousand laps of a four hundred metre track. The race took more than forty hours to complete, with Terront beating Corre by about nine kilometres.

For the first twenty-seven hours or so the two riders were evenly matched, neither being able to open up a lead on the other. But so far, neither had stopped for a toilet break. Unable to hold on any longer, Corre was the first to climb off and alleviate the pressure on his bladder. Terront rode on. By the time Corre remounted, he'd lost several kilometres to his rival. But, he must have figured, he was sure he'd make that up when Terront stopped. Except Terront never did. He just kept rolling and rolling and rolling around the Galéries des Machines. When Corre stopped again, Terront extended his lead even further. And he still hadn't stopped.

Terront's secret? When he needed to relieve himself his assistants handed him up a an inner tube - une chambre d'air - cut open and knotted at one end. Into this Terront was able to let go on the go. Given how dull two men riding round and round and round a four hundred metre track two and half thousand times can be, the reporters loved Terront's exploit, hence their punning headline. Even Corre took it in his stride and was reported as having said that "Terront didn't even beat me by a tyre. He beat me by an inner tube."

Those early years of the sport are rich in such stories and Woodland happily recounts them. Try one story involving Louis Trousselier, who won the third edition of the Tour de France. Trou-Trou and two or three of his friends would stop at a nice restaurant while out on a training spin and dine expensively. Toward the end of the meal they'd get into an argument. The patron would eventually come over to find out what was wrong and calm them down. Trou-Trou would tell the patron they were arguing over who was the faster among them and then suggest that perhaps the patron could suggest some landmark a kilometre hence, to which they could ride and then race back, with the patron calling the winner of the sprint outside his eatery. The patron would agree, the cyclists would saddle up and ride out toward the landmark suggested by the patron ... and never be seen again.

Or how about a tale of organisational incompetence? Take the 1931 World Championships, held in Denmark. In the sprint race, the local rider, Willie Falk Hansen, was clearly beaten by the French rider, Lucien Michard. But the UCI blazer officiating on the day miscalled the race for Denmark. Even the crowd of locals weren't very impressed with this level of incompetence. Eventually the commissaire was convinced of his error. Except there was nothing he could do about it. The UCI rules insisted that once a decision was made, it couldn't be reversed. Even if it was wrong. Thank the stars that society has advanced in the last eighty years and such a thing could never happen again, in any sport. Back then though, as far as the UCI was concerned, the first could be last, and the last could be first. The good outcome of the story was that for the next year Hansen and Michard made a killing re-running the race at track meets around Europe.

Other tales Woodland tells are just pure mischief. Take the 1969 Tour de France. Dutchman Rini Wagtmans decided to play a joke on the peloton and at the start of one stage took off at great speed as the race was still in the neutralised section. He blasted past his fellow riders, and past Jacques Goddet in the lead car at the head of the race. On and on he flew and was quickly out of sight of all behind him. At which point he suddenly slammed on his breaks and slipped down a darkened side alley. His plan was to stand station there, waiting for the peloton to pass, and then to rejoin at the rear, idling up through the ranks and surprising everyone, who would think he was miles ahead down the road. What a jolly jape that would be.

Except that a few riders in the peloton took Wagtmans' escape seriously, and gave chase. And the peloton took their pursuit seriously. Soon enough the hammer was down and the whole peloton was chasing furiously. Poor Wagtmans himself then had to try rejoin a peloton in flight, alone and unaided. It took him some time and considerable effort. Even he was no longer seeing the funny side of the story by the time everyone realised what had happened.

Woodland quotes Wim van Est telling another story about Wagtmans: "We were riding the Dutch Club Championship and we'd got an eight minute lead. Five hundred metres from the line [Wagtmans] saw a little children's bike and he got on it and pedalled across the line on that. The judges didn't get the joke and they disqualified us."

Sprinting is, of course, where the sport threads a thin line between a close contest and downright crookedness. There's a tale, recounted by Tom Simpson in his autobiography - after a while you begin to recognise the main books Woodland is pulling his tales from - about the 1963 World Championships, which took place in Belgium. Local hero Rik van Looy was considered one of the pre-race favourites. In the finishing straight van Looy was going like a steam train, until he saw his compatriot Benoni Beheyt coming through. Then Beheyt grabbed a hold of van Looy's jersey. As the less favoured of the two Belgians he should have pushed van Looy toward the line, ensuring his victory. But ambition seems to have got the better of Beheyt that day and he tugged van Looy backwards, pushing himself forward, claiming the rainbow jersey for himself.

Such is the hurly-burly of sprinting and whether such jersey-pulling is cheating or not is never quite clear. Van Looy, nicknamed the Emperor, seemed to take defeat in his stride, but soon enough let it be known that he would not look favourably upon anyone - riders or race promoters - who aided Beheyt's career. By 1967, when he was just twenty-six, Beheyt had finally got the message and quit the sport.

Overall, The Crooked Path To Victory is a worthwhile book, something to dip into and out of. The majority of the tales told are of the type quoted above, with the worst excesses of cheating saved for the section on doping and the well worn tale of fear and loathing on the 1998 Tour de France.

Regrettably though, the whole just doesn't really add up to anything substantial, Woodland offering no theory as to why we can like a sport that is apparently so crooked, particularly where pharmaceutical enhancement is concerned. Nor does he suggest a linkage between the differing degrees of lawlessness. All he offers are the stories themselves. It's up to you to make of them what you will.