If you were shuffling through my deck of home-made Top Trumps cards (or keeping an eye on the women's peloton) you might notice that the 2 biggest nations are the Netherlands and Italy, in terms of numbers of riders out there (and arguably in terms of general success).  Italy certainly loves its women riders - it's home of the biggest stage race of the year, the Giro Donne, and has a whole load of media that loves to cover the racing.  And some of my favourite websites that cover women's cycling are Italian - I adore Cicloweb and  Ciclismo In Rosa, and I hope you do too.

One of my favourite things about the Italian scene is how it's not just the races and the media that support the women's racing, but also national agencies, who support the rider 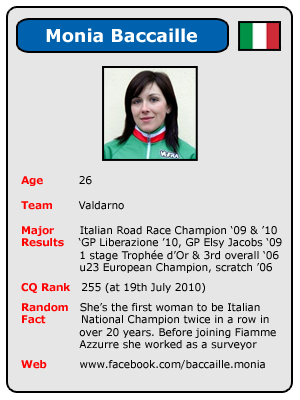 s and other athletes by giving them jobs (or maybe "jobs") that enable them to ride full time.  If you have wondered about us joking about riders being prison officers and lumberjacks, this is because 2 of these agencies are Gruppo Sportivo Forestale (sponsored by the national Forestry Corps) who support sprinters Giorgia Bronzini and Alessandra d'Ettorre) and the Gruppo Sportivo Fiamme Azzurre, part of the Italian Prison Service, who go one better and support a whole team, Valdarno.

One of the Fiamme Azzurre riders is current Italian Road Champion, Monia Baccaille, who before joining the prison service had been employed as a surveyor in the technical department of the City of Marsciano, another generous employer who presumably didn't mind her taking time off to win races.

It's a sign of how competitive women's cycling is in Italy that Monia was the first rider to win the national road race title 2 years in a row for over 20 years, when Maria Canins ("the flying Mother") won it 1987, '88 and '89.  Monia has big plans for the future too - she's planning to take a holiday in 2012, after the London  Olympics.... She's also a great domestique supporting current World Champion Tatiana Guderzo at Valdarno.

Below the jump, some more of the Italians riding in the peloton, and more proof, if it's needed, of the support the women receive in Italy, and the way the Italian cycling set-up comes together to respond to tragedy, as well as success.... 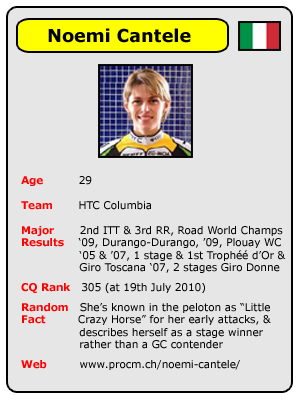 One of the themes of Italian cycling is how much of a family affair it can be, and Noemi Cantele is no exception.  Her grandfather and father cycled, and although she started out as a swimmer, she soon followed her big brother onto the bike.

Her first big result was at 18, when she won bronze in the Junior World Road Race Championships, and she's continued to win something prestigious pretty much every year since, with stage wins in most of the big races (including stages in the Giro Donne in 2006 and 2009), the GC in both the Trophée d'Or and Giro Toscana in 2007, and some tough races, the biggest being Plouay (aka GP Ouest France when she won it) in 2005 and 2007.

In 2009 she raced in the Time Trial in the Road World Championships for the first time, winning silver, and added that to a bronze in the Road Race, where she raced a beautiful race, continually attacking Marianne Vos and then harassing the chase group once her team-mate Tatiana Guderzo had escaped up the road.

She'd been riding for Bigla, but when it folded, signed to HTC-Columbia.  At first glance, 2010 hasn't been such a good year for her, and maybe she hasn't bedded in yet... but then again, all those races she's won in the past - Plouay, Trophée d'Or and Toscana are still to come....  I'm certainly not going to write off her season before it's over - and seeing as she's part of the exclusive club of riders interviewed by Gavia, it's every Café member's duty to support her at every possible opportunity! 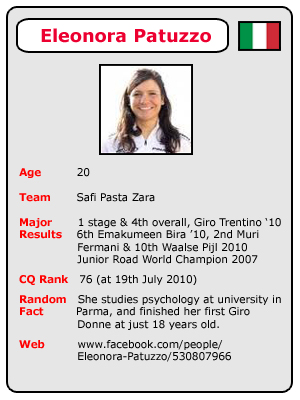 One of the impressive things about Italian cycling is the way they develop their very young riders, and Eleonora Patuzzo is just one of the Italians who have won the Junior Road World Championship.  She's just one of the many 20 year-olds out on the roads - and at 20 there's not that much to say about the riders, as they haven't had time to develop their careers.  Eleonora studies psychology in her spare time - and apparently is a very canny and tactical rider.  She won a stage at this year's Giro del Trentino against some of the biggest competition in the world, and will hopefully prove to be a lot of fun to follow.

The next two 20 year-olds, Valentina Carretta and Marta Tagliaferro both got into cycling through following their big brothers - although cycling seems to be all the way through Vale's family tree - and both have had top 5 placings in big races this year.  Marta may be more of a track rider, although with the UCI changing rules to only allow 1 rider from each country to ride the long races, she loses out on opportunities to race the Worlds behind track superstar Giorgia Bronzini (who she's previously provided very strong support for when they raced in the points races together)

If I were choosing between the 2 Top Girls, I'd pick Marta for the flat races and Vale for the ones with short, sharp hills - and Eleonora for the GC and Young Rider's jersey! 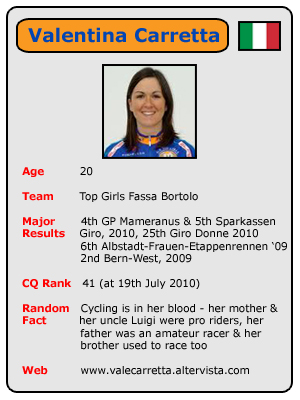 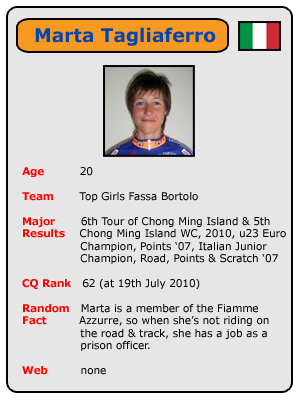 The problem with writing this article is the fact it's all overshadowed by what happened to Marina Romoli.  If I was writing this back in May, I'd be including Marina as another young rider to watch, another rider who followed her brother and her father into the sport.  She was riding for Safi Pasta Zara under the direction of retired superstar Diana Ziliute. Then on 1st June, shortly before her 22nd birthday, she was out on a training ride with her boyfriend Matteo Pelucchi and their friend Samuele Conti, when a car pulled out of a junction in front of her.  Marina punctured a lung, needed reconstructive surgery on her eye, 500 stitches to put her face back together, and worst of all, major spinal surgery.  She was put into a coma for 8 days, waking up on her birthday.  Since then she's been on the slow road to recovery - and although she still has no feeling in her lower body, she's working hard in the hope she'll one day be riding again.

Horrific as this accident is, it's shown how strong the Italian women's cycling community has been.  Eleonora Patuzzo has interviewed about how the young Italian riders have all grown up together, so this feels like something that's happened to a member of their family.  Safi have been dedicating their races to Marina - and the Giro Donne was notable for the home-made "Forza Marina!" banners along the route - and "Forza Marina!" was a theme for the race organisers, with it emblazoned on the podium every day.  When riders were interviewed before each stage they sent her messages - and when the final stage began with a recorded message from Marina, half the peloton were reported as being in tears.  Matteo's team Trevigiani has also been incredibly supportive, as have the u23 Italian development squad they both rode for.

Marina was recently interviewed in La Gazzetta dello Sport about what she remembers of the accident and where she is now, and you can read the Anglicised version here on Velonation and here on Cycling News.  You can also leave a message for Marina on the facebook group.  It's a horrible tragedy, but at least Marina can see how much support there is for her - and of course I can only add mine as well - Forza Marina, all the best for your recovery, here's to seeing you back on your bike in the future.