It's Not All Podium Kisses

Share All sharing options for: It's Not All Podium Kisses 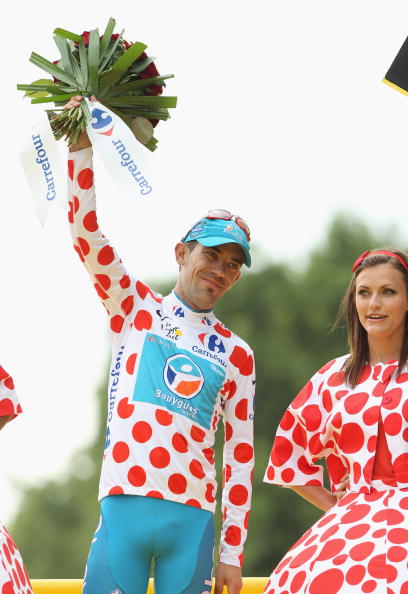 The Tour of Britain is looking for podium girls, and the Guardian and Jezebel are here to tell you that it's bad news. Jezebel calls the tradition "patronizing," while the Guardian is miffed at the low payment £50 per day and the responsibility of "kissing the sweaty cheek" of the day's winner. Eeeew, cooties.

All this would seem to be your usual feminist hand-wringing over beautiful women standing around, well, looking beautiful. Somewhere along the line, though, the Guardian got the idea that podium hostesses are cyclists:

What is crushingly depressing is that the hostesses (known widely as podium girls and festishised all over the internet) tend to be top cyclists themselves.

Say what? If any of the women wearing the the polka dot umbrella skirts at the Tour de France had ever raced a bike, I would be massively surprised. Like, fall off my couch suprised. The podium hostesses are nearly always models or aspiring models. I've yet to see a bike racer, though there's always a first.

To be sure, the Guardian raises a good point. The Tour of Britain, like many of the big pro men's races, does not include a women's race. It should. The British women, including Nicole Cooke, Lizzie Armitstead, Emma Pooley, well, they're seriously fast. Certainly, they deserve a high level race in their home country.

But criticizing the podium presentation is beside the point. It's not like Nicole Cooke is going to apply to present jerseys at the Tour of Britain. She's like busy, you know, racing her bike. That women riders actually have their own races seems to have escaped the Guardian writer. I guess we should thank her for trying, at least.

Me, I love me some women's athletics and I've spent a good portion of my life competing in one way or another. Oh Title IX, how I heart you. I've never had the ambition to be a podium girl. But the practice doesn't exactly get my shammies in a twist. Actually, I found it a bit odd that the Tour of California seemed almost apologetic about the whole thing. Khaki pants? For reals? C'mon, glam that thing up! It's California.

Every month, one of the surf magazines runs a sexy shot of a lovely woman in a bikini oppposite the colophon. Last weekend at surfing's U.S. Open, Carissa Moore took home a $50,000 check for wining the contest. Girl rips. I'm saying, there should be space for all kinds of girls. As long as Carissa Moore gets paid to rip, I don't mind the girl posing for the bikini shot.

And that's where cycling needs to step up. Where's the $50,000 for the race winner? Forget the podium girls. That's hardly worth the effort, especially since I suspect the Tour of Britain, like other races, will have plenty of applicants for the job. No, what women cyclists need is more bike races, more press about their bike races, and more money. And those things won't come from taking away the podium kisses.