Hincapie Crashes out of Tour of Utah

Share All sharing options for: Hincapie Crashes out of Tour of Utah 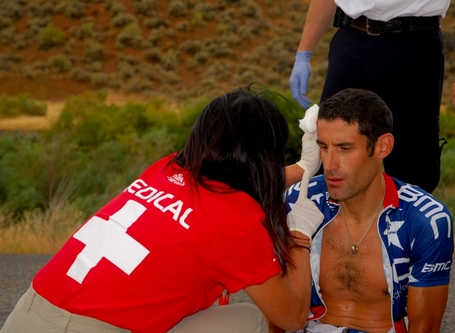 George Hincapie crashed out of the Tour of Utah today, when he hit a patch of gravel. His front wheel slid out from under him, which is never a good thing. Fortunately, the current U.S. National Champion did not break any bones, but Hincapie did require 18 stitches to close a cut in his right knee. Hincapie's said later, "Crashing is never a good thing. I'm definitely concerned with my knee and how much time I'm going to have to take off the bike. It's not a good time for that."

The U.S. National Championship takes place in Hincapie's hometown, Greenville, South Carolina, in just three weeks. That's not much time to recover from an injury and regain winning form, though it's too soon to say whether today's injury will keep him out of the race. Team doctor Max Testa explained in a team press release, "We'll monitor him closely the next 24 hours and then make a plan for his recovery." Team manager John Lelangue, meanwhile, suggested that Hincapie might head to Canada for the two Pro Tour races to prepare for the National Championship. "I hope to see him at 100 percent for nationals because it's a special race, he's the defending champion and he's at home," commented Lelangue. But "we'll see how it goes," he concluded.

Check back later for images from the Cafe's roving photographer, Fred Marx. Marxy spent the day on the moto and should have a fab collectin of shots for us.