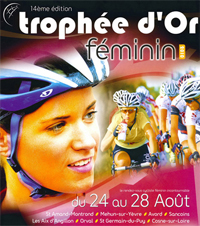 After last weekend’s short break for the last round of the World Cup,we now return to the stage racing season with the 14th edition of the Trophee d’Or, four days, five stages and 467km of racing based around the town of Saint-Amand-Montrond in the department of Cher, almost bang in the centre of France. The first race back in 1997 was won by Jeannie Longo, and the list of winners since should give you some idea of the terrain, including names such as Edita Pucinskaite, Joane Somarriba, Leontien Van Moorsel, Noemi Cantele and Emma Johansson. In other words we’re back in the hills, not the high mountains, but an in between sort of area that offers hope to both the climbers and the not quite climbers. Yet last year Beatrice Thomas of French team ESGL 93 - GSD Gestion won a small lead in the hills then watched helplessly from the back of the peloton as Diana Ziliute battered it down with bonus seconds won in the sprints (and even more agonizingly after trying her best to defend, broke a wheel just 6km from the finish line on the last stage to drop to 22nd overall).

and give a map and route for Thursday’s stage 4, both from the mayor’s office in start/finish town Avord, but that’s about it for maps. The mayor of Saint-Amand-Montrond tells us that the time trial includes the nasty climb of Côte de Nozières, but no-one has yet thought to add that to climbbybike, and I can’t see any likely candidates looking at bikemap. And stage 5 includes 6 climbs towards the QOM jersey. If I find any more scraps to add, I’ll put them in the comments.

OK, so details on the course are a bit vague, then who’s riding. According to that newspaper clipping I just linked to, there are 20 teams of 6 riders, coming from various nations including Belgium, Poland, Russia, Italy, Denmark, Spain, Germany. Luxembourg, Switzerland, Australia, Portugal, Ukraine, Ireland and the UK. Even better, here’s a start-list. The big three, Cervelo, HTC_Columbia and Nederland Bloeit aren’t riding, but just about everyone else is. Emma Johansson is at the head of her Red Sun team, and teammate Ludivine Henrion has won a couple of stages here in the past. Lotto have their two lead climbers, Grace Verbeke and Ash Moolman, plus Vicki Whitelaw who has fought for the QOM jersey the last two years. Gauss look particularly strong and prepared for everything with climber Edita Pucinskaïte, intermediate rider Martine Bras and sprinter Giorgia Bronzini. Olga Zabelinskaya has gone home to prepare for the Worlds, leaving Rasa Leleivyte and Eleonora Patuzzo to defend DS Diana Ziliute’s title for Safi-Pasta Zara, while Nicole Cooke will be hoping that her young GB team look a bit better than they did at Plouay (is "Lussie Armistead" Lizzie riding for the national team, and is this a first attempt by British Cycling to cool things in Nicole’s grudge match with Emma Pooley after their little disagreement at the national championships?). Finally don’t forget the French girls, including Beatrice Thomas of ESGL 93 - GSD Gestion, her newly unemployed teammate, National Champion Melodie Lesueur, and Christel Ferrier Bruneau of Vienne Futuroscope who has had a great season in domestic French races, including victory in the Berry Classic held earlier this year in Orval.

I don’t think there’s much chance of video from here. Actually it’s tricky to find any info at all. The best English language source for news last year was Vicki Whitelaw’s blog, but maybe we will get a bit more from the South Africans, both those on MTN who seem to be riding as a National team, and Ash Moolman of Lotto. If you can read French then there is this unofficial blog from last year which may once more come up with something, and Roltiss also has useful reports if you remember that you have to scroll down quite a way to get to new content. If you find something else even vaguely useful looking then please post it below.