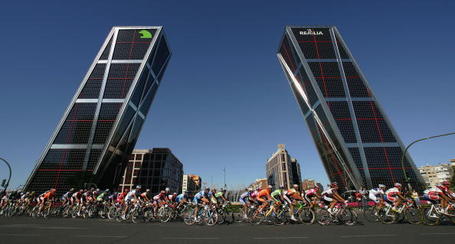 Once again, I leave the larger GC matters to my colleagues, señor Ursula in this case, and focus on the points. And here, the story is 100% Geelong. Never mind that we've all officially convinced ourselves that the World Championships course in Australia is not really for sprinters; it's too long and difficult. The sprinters themselves aren't giving up hope, and they're coming to Spain to make good on whatever promise actually does lie ahead. And there is no shortage of national federations building around the likes of Cavendish for the worlds, regardless of whatever speculation is being whipped up by IFPs. So nearly every sprinter you can think of is on his way south to Sevilla to take the start in the 2010 Vuelta a España, kicking off Saturday. The question though is whether Geelong will taketh away what it giveth, and dissuade the fastmen from spending themselves over the Cantabrian peaks en route to Madrid.

First, a few words about the route. The Vuelta has adopted ASO-speak regarding classifying stages, and has labeled no fewer than eleven of them as "plain". But in Spain this designation can be a bit comical at times. For example, stage 4 to Jaen is up and down for a while before culminating in a 15% grade to the line in the last km. Stage 10 ascends Lo Rat Penat, maxing out at 23% (not a typo), four km of punishment that should splinter the field 30km from the line. The Toledo stage will be tricky in the closing km. And some of the earlier ones just go up and down a lot... you never know.

A threshold question then: will a sprinter even win the points? Probably. No non-sprinter has won las puntas at the Vuelta since 2001, so unlike the Giro the GC guys tend not to be in play. And there aren't enough uphill finishes to upend the usual order of things in this year's race. The only reason it's a possibility is the prospect of the sprinters going home before Madrid and taking all their points with them. Then there's the crafty Hushovdian types, and if you're reading this sentence there's a 99% chance you were around when we belabored endlessly the point in July about the classification not being purely about sprinters... only to see Alessandro Petacchi and Mark Cavendish go 1-2. Anyway, the Vuelta has been the most sprinter-friendly of the grand tour points competitions, with Petacchi, Bennati, Hushovd, Van Avermaet and Greipel the post-Zabel-Era winners.

Obviously I don't know the identity of every rider selected for the Worlds at this time, but this is my guess. With Tom Boonen sidelined* both Weylandt and the more versatile Van Avermaet are no doubt fancying their chances in Geelong, so they'll be here to do whatever is necessary to get on top of their game. Freire's condition is unknown (to me) and his chances in Geelong aren't great after a quiet season, but some Vuelta success would be good tonic. Forster, Bonnet and Petacchi have to be realistic about Geelong, and shouldn't hold back in Spain (assuming Petacchi even gets to take the start). Goss will probably be working for Cavendish, and anyway both he and Davis would likely have trouble focusing on the Vuelta as anything more than training. Ditto for Dean.

As for the Big Two Three, while all of them will have an eye on the worlds, I can't see Farrar and Cavendish not going all out to beat each other in Spain. It's in the DNA and the legs as well, and neither one of them wants to go into Geelong with a losing streak next to their name. Also, neither one of them has a points jersey in his closet yet... shocking considering their pedigree. These are the two most likely riders to pull out in Week Three, though with two weeks between Madrid and the WC road race, why not finish? They have nothing else to do. [Adding:] Hushovd will do his usual thing, though to win the points he'll need Cav and Farrar to let him slip from their grasp. Won't be as easy in Spain.

I can't help taking a moment to point out how Andre Greipel and Gerald Ciolek aren't here. The Gorilla is off to the Tour of Britain, conveniently nudged out of Spain and its superior Worlds training in favor of his "teammate" Cavendish... though in fairness Britain and Eneco together make up a decent plan B. Ciolek, meanwhile, needs to be here.

Actually, Bole and Hooter could be in Geelong, don't ask me. But if they get there it'll be on microscopic squads, so let's just park them with the sprinters like Bos who have little to worry about after Madrid. And who have everything to gain from the idea that worlds sprinters should pull out in week three. Look for each of these guys to furiously retweet every message suggesting that people should get to Australia good and early.

Bole is an intriguing prospect -- he was consistently fast in Poland and got a decent result in Ouest France, so he's on top form. Bos isn't making much of an impression these days, and Hooter hangs around the top 5-10 everyday, nothing more. Koldo could easily get on a lower step in Madrid, with a few Vueltas and some decent results under his belt. Not particularly on form though.

Just sayin. He may guard his form in case the worlds looks more like a long, arid Gent-Wevelgem than whatever else. But Gilbert could be around at the end. Since he's my mortal lock to become the next world champion, a strong Vuelta is a good pathway there.

The Pick: Cavendish. I bet he and Farrar duke it out to the finish, but until Tyler comes around the Manx Missile, all bets start here.

[*Off topic: when does "Gazet van Antwerpen" translate to "Washington Post"? When google translate is involved. Try it for yourself. Hey, think this is weird? Not as weird as Sporza lifting Patrick Lefevre quotes from the Post.]