One Week and Two Rainbow Jerseys On

Share All sharing options for: One Week and Two Rainbow Jerseys On

What a difference a week makes!  I have my cursor blinking away in front of my as so much has happened for the Horizon Fitness Racing Team and cycling in general this week and I’m not sure what to focus on.  I had planned to tell you a bit about how the team/project came about, but this week’s been a wee bit mad.  So where so I start?  How about with a World Championship or two? 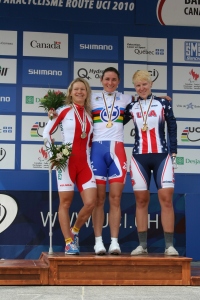 Sarah Storey won two gold medals at the Para-Cycling World Championships, in the Time Trial and Road Race.  Personally speaking I couldn’t be more proud and I can only imagine the buzz the team had when they heard the news while preparing for their big race in Germany.  During a high-powered management meeting by text message (life on the road in Women’s cycling is fraught with no internet or even mobile phone signal) it dawned on us that, despite already having been DS for Olympic and World Champions in the past,  Sarah’s win in Thursday’s TT was the first time someone has become World Champion under Stefan’s charge.  It’s safe to say that the team is very proud of Sarah.

While Sarah was implementing her plans for world domination, Stef and 5 of Sarah’s team mates were in Albstadt, Germany for a 3 day stage race.  Gabby picked Penny en-route as they drove from the UK to meet the team in Belgium, unfortunately near the Team’s HQ in Tielt Winge a local decided to drive his car into the side of Gabby’s shiny new van.  The van took a bit of a beating and on the whole the girls were thankfully fine, if shaken up with  stiff necks (to take a mild tangent Ella was in a car crash 24 hours later, she’s fine, though I’m sure a few colourful words would have been said to her friend who was driving).  Once in Germany the team acquitted themselves well in what was a tough wee race.  Helen was our top placed rider in the GC and managed an 11th place on the first stage, on the whole what we were looking to use this as an opportunity to develop the younger riders in the team and when you pop along to www.onthedrops.com (shameless plug) you can get a good idea of how the girls thought they faired.

Things can get a bit manic when the team gets together for stage races and I’ve found this process quite interesting if a bit frustrating.  2010 has been a bit "suck it and see" at times in approach and I’m working on some technical partners for the team that will allow us to manage our communication to the global world a bit more effectively.  I hadn’t realised just how pants some of the communication facilities are for teams on the road in Europe, which I now realise is part of the problem with race reports from women’s races.  It’s a small detail, but a ‘roaming’ 3G connection just isn’t feasible for the budget of women’s cycling teams, especially when the network coverage in the rural areas where teams end up isn’t too hot.  The good thing is I know about this issue now while looking for a technical partner for the team. 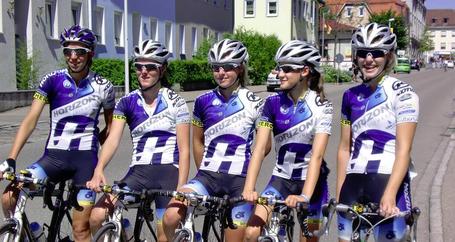 Part of what’s on my mind today (I’m writing this on Thursday) is the news about the Cervélo Test Team and the mixed messages coming out about the future of their women’s team.  We’ll probably discuss it more next week once things area bit clearer, but we certainly hope the women’s team remains unscathed.  An often forgotten fact about Cervélo is that the women’s team has been around longer than the men’s and was such a success that the men’s team was formed off the structure of the women’s team.  Key people involved in the team were pretty much lifted and dropped from the women’s team to the newer men’s team.  I take that as a huge compliment of the quality of people involved in women’s cycling.  We wish everyone involved with Cervélo all the best, but especially our good friends Emma Pooley, Sharon Laws and Lizzie Armistead (Lizzie and Emma have both raced for Stef in the past).

To finish on a positive note, Sarah Storey, Alex Greenfield and Hannah Rich have been asked to represent their countries at the Commonwealth Games in Delhi in October.  Sarah will be representing England for the TT and is a backup for the Road Race, while Alex and Hannah will represent Wales on Track and Road.  I can’t believe I’ll be cheering on England and Wales instead of Scotland... they’ll never let me north of Hadrian’s Wall ever again!

See you all next week for a bit of a natter on the beginnings of the team and I’ll introduce you to Stef.

Stuart - On The Drops