Share All sharing options for: Garmin-Cervélo Smash! Thor Signs On 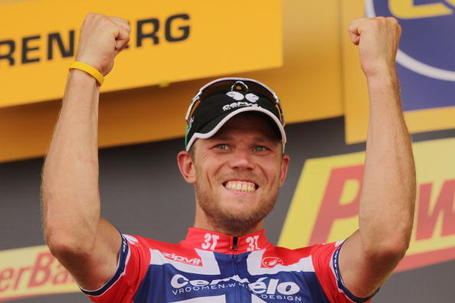 Another day, another press release from the lovely people at Slipstream. Today, the team has announced that Thor Hushovd will race for the renamed Garmin-Cervélo. It appears to be a one year deal between Slipstream and the Norwegian who is a past winner of the Green Jersey at the Tour de France. Press release quote!

"I’m going to focus my season on the Classics," said Hushovd. "My biggest goal is to get one major Classics victory in 2011. I’ve come close over the past few years so I will build on that experience and hopefully, stand on the podium with my new team."

So, it's all about the classics, which Vaughters has said is a big goal for Garmin-Cervélo in the coming season. This latest signing gives Garmin-Cervélo a nice pairing in Hushovd and Farrar. Both have the speed for bunch sprinting, but have also shown well in the Spring classics. The old Mapei and Domo-Farm Frites teams showed how much difference numbers can make in the big Spring classics. With the exception of Fabian Cancellara, who just up and rode away from everyone this season, most big wins at races like the Ronde van Vlaanderen and Paris-Roubaix are built on the foundations of solid team support. The Hushovd signing is a nice step toward building a deep team at Garmin-Cervélo.

Unanswered here, of course, is how Farrar and Hushovd will divide duties at the Tour de France. Farrar has ridden as Garmin's bunch sprinter, while Hushovd is a past Green Jersey winner. Certainly, there is possiblity for conflict between the two riders, though in recent seasons, Slipstream has seemed relatively low on team Drama with riders switching relatively easily among different roles. At least, that's how it looks from the outside. Perhaps there are tears every night in the team bus, but if so, no one is telling. We'll see in July, anyway.

No doubt there are more signings on the way for Garmin-Cervélo as the Big Merge is only just beginning. Over at the Boulder Report, Joe Lindsey has a look at how many roster spots the new team has open and how many riders have yet to receive contracts. It's musical chairs, and at this point, it's looking like some good riders may be left standing when the music stops.